Up the Burgundy Canal to Pouilly

Aug 29 Posted by Penelope and David Kerr in Barging 2017 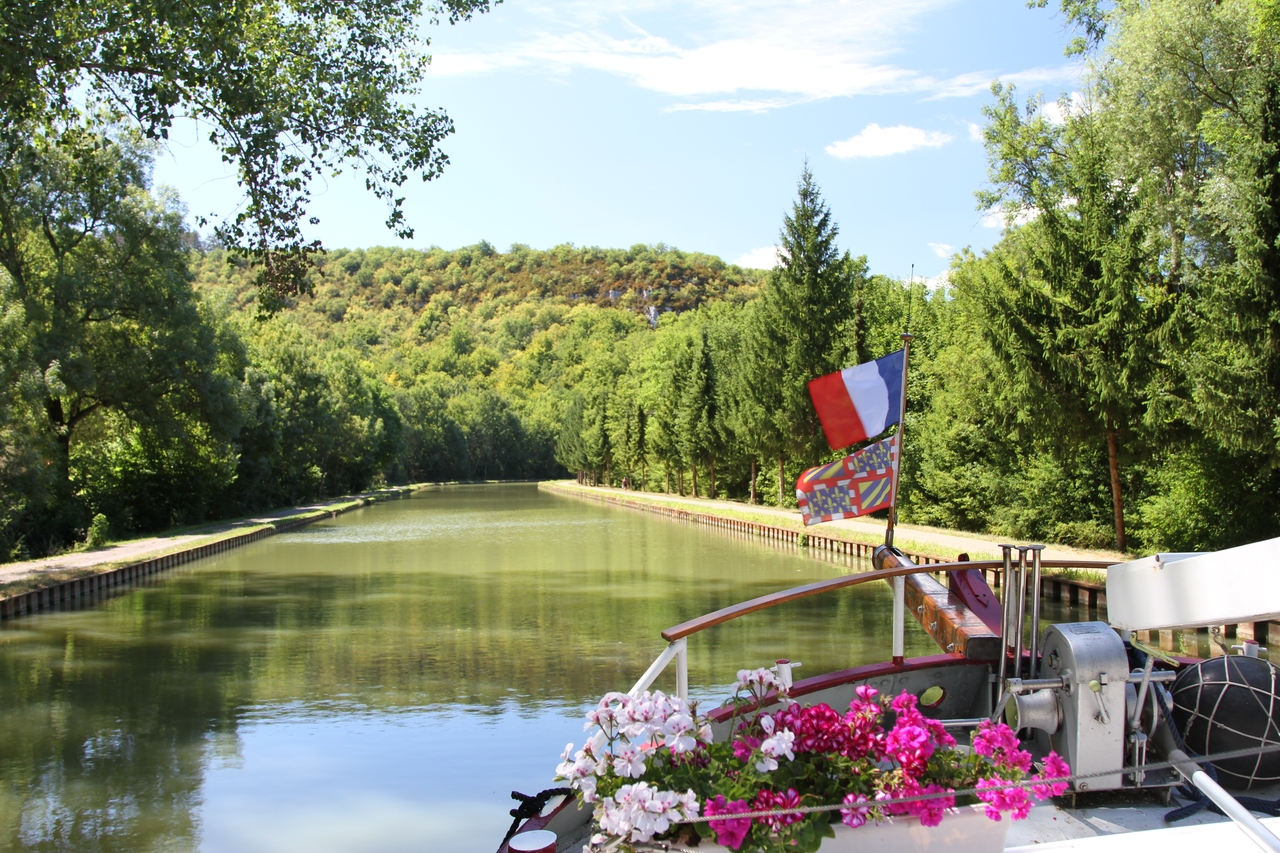 The Burgundy Canal awaits us

When we started our adventures on Anja in May 2010, our first steps were up the Burgundy Canal, climbing 200metres towards Pouilly, then 300metres down the other side to Migennes. And that's how we are finishing our last season in August 2017. Even though we have been on the canal twice, there are still some places new to us to stay and explore. 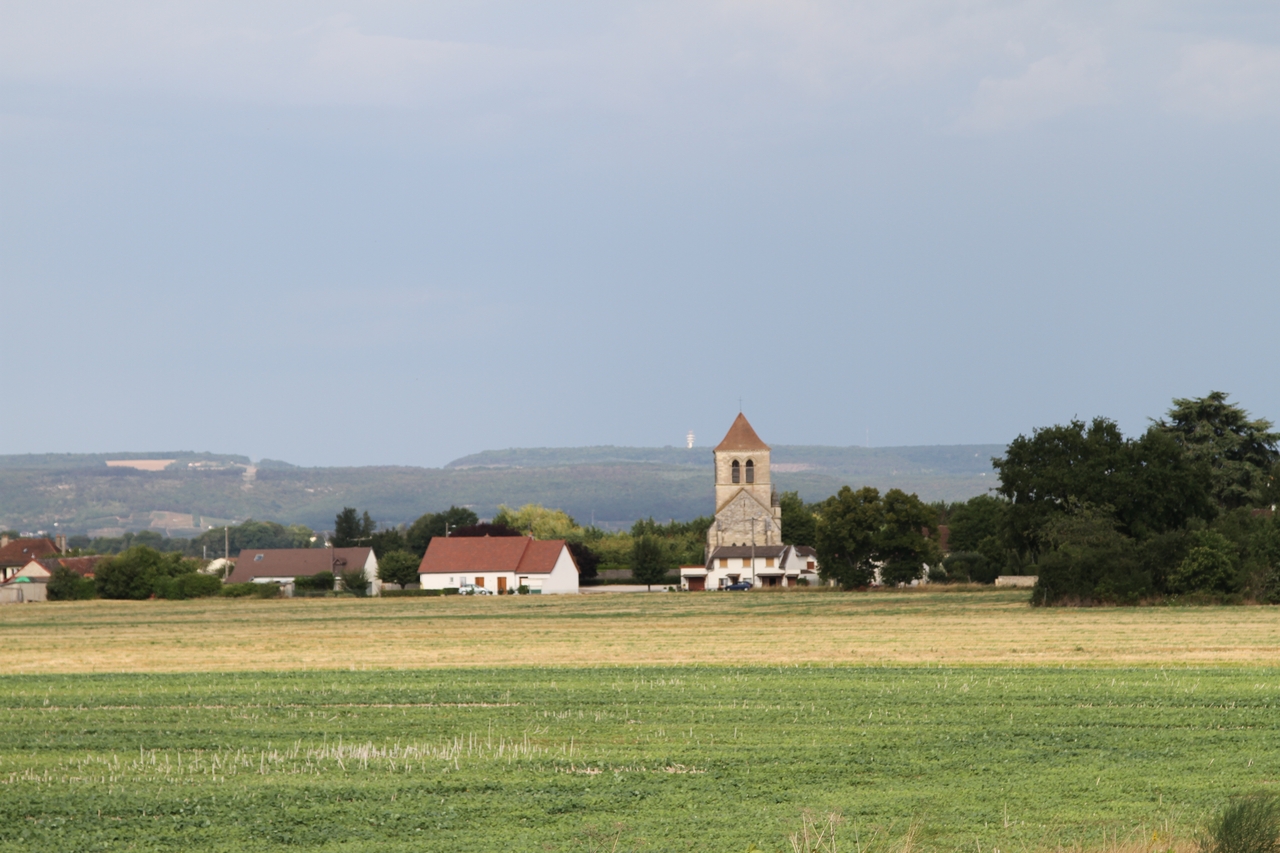 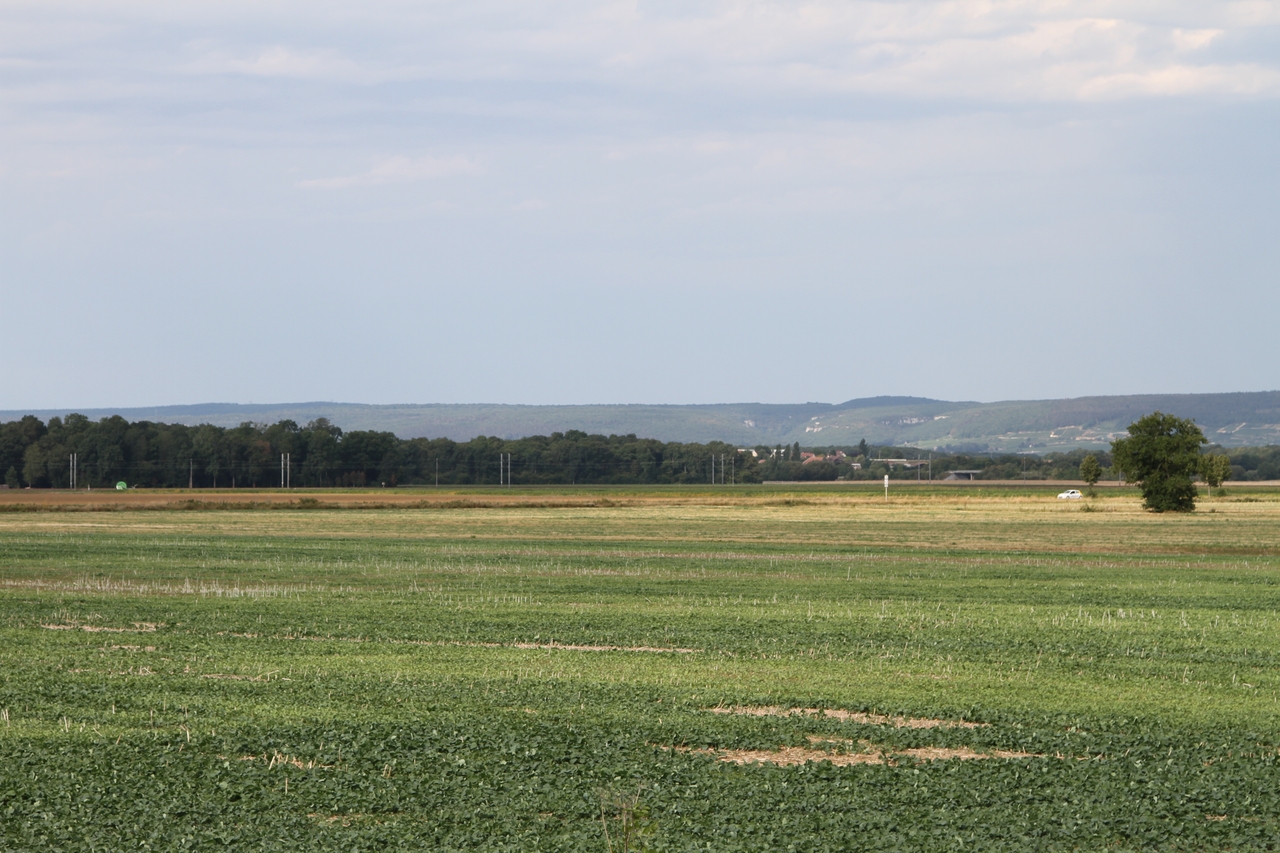 Our starting point for the Canal was St Jean de Losne. This town is very much a hub for Canal boats, full of both commercial and pleasure boats of all sizes and claimed to be the largest inland waterways centre in France. Here the Saone River meets the Burgundy Canal and nearby are the entrances to two other canals, one travelling East, another North, so it is an important crossroads. The largest company for canal boat sales, H2O, has its headquarters here and there are also several boat repair companies, chandleries and hire boat depots.

As a result it can be difficult to find a stopping place but over the years we have always tucked ourselves in under the bridge in a spot just the right size for us, out of the way of the traffic passing by. We had completed 1,000kms since starting, so we filled up with fuel, for the first time this year (great to have such big tanks) then set off to the first of the 189 locks on the Burgundy Canal. After spending the year on waterways with automated locks or the large locks on the Seine we had to get used again to the need to tell the lock-keeper at the beginning of the day how far we wanted to go, and when we would like to get underway next morning. We thought it had all come apart on our second day of travel when no-one turned up to man the lock until 70 minutes after the time which had been agreed. We left messages on the nominated phone number and were relieved when eventually someone came. We never found out what the problem had been. However, lock keepers said they were very tired after three hotel boats in one morning. In our experience, these boats can be rather selfish and change their minds about travel at the last minute. They do have priority and justify their behavior based on the fact that their passengers are paying about A$2,500 each per day! After that, the system worked very well and we have made excellent progress through the locks. 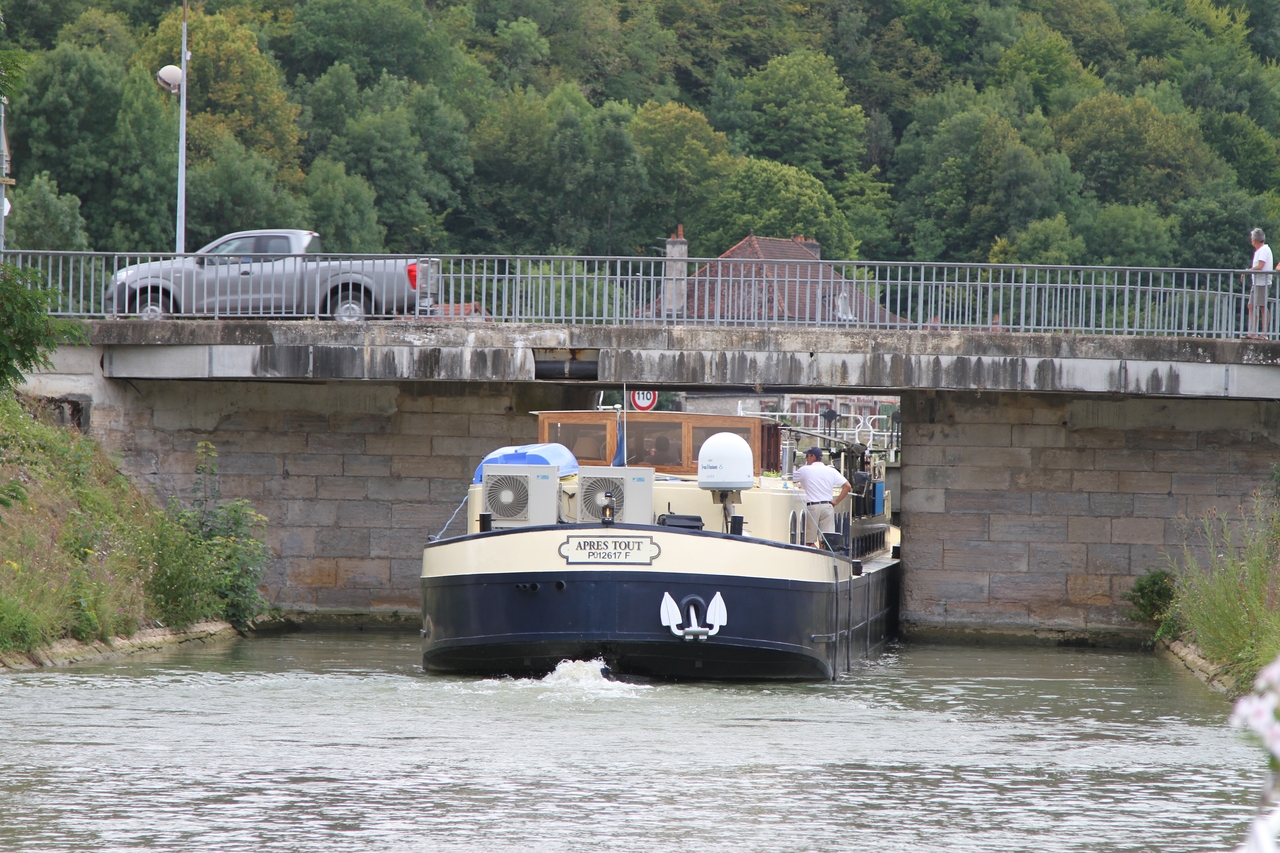 Hotel barge squeezes into a lock

Often there are two lock- keepers. When only one, David gets out to close one of the gates, and re-open another it when it is time to leave. This substantially speeds up the process and also allows good interaction with the lock-keeper. 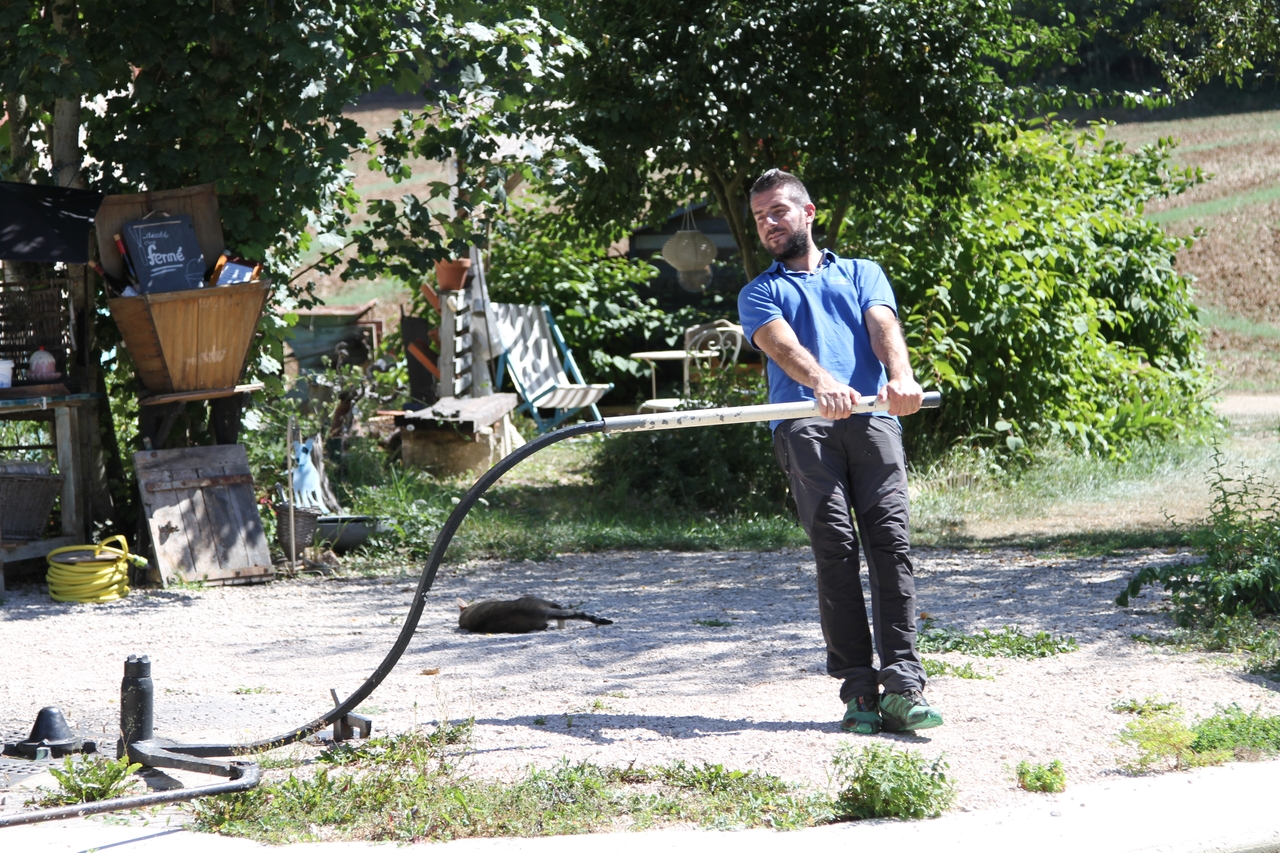 One day our lady eclusier happily accepted the offer of a cup of coffee half way through the morning, then thanked us for our excellent service- usually our words as we farewell the lock- keeper at the end of a session. 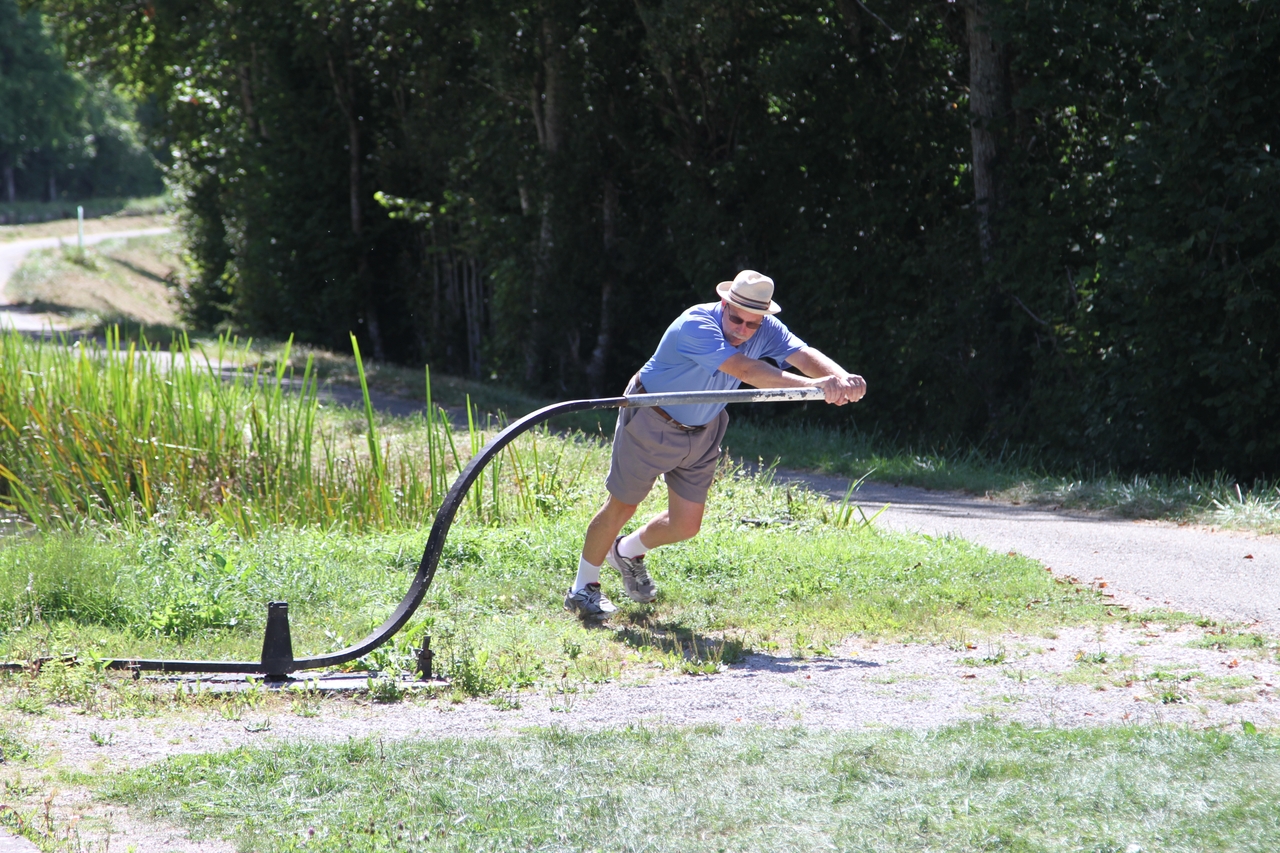 At first the land around the Canal consists of plains, with hills far off in the distance. The turning point comes at the major city of Dijon, Capital of Burgundy. After that the terrain changes and the canal follows the pretty little Ouche River and the many towns along it. 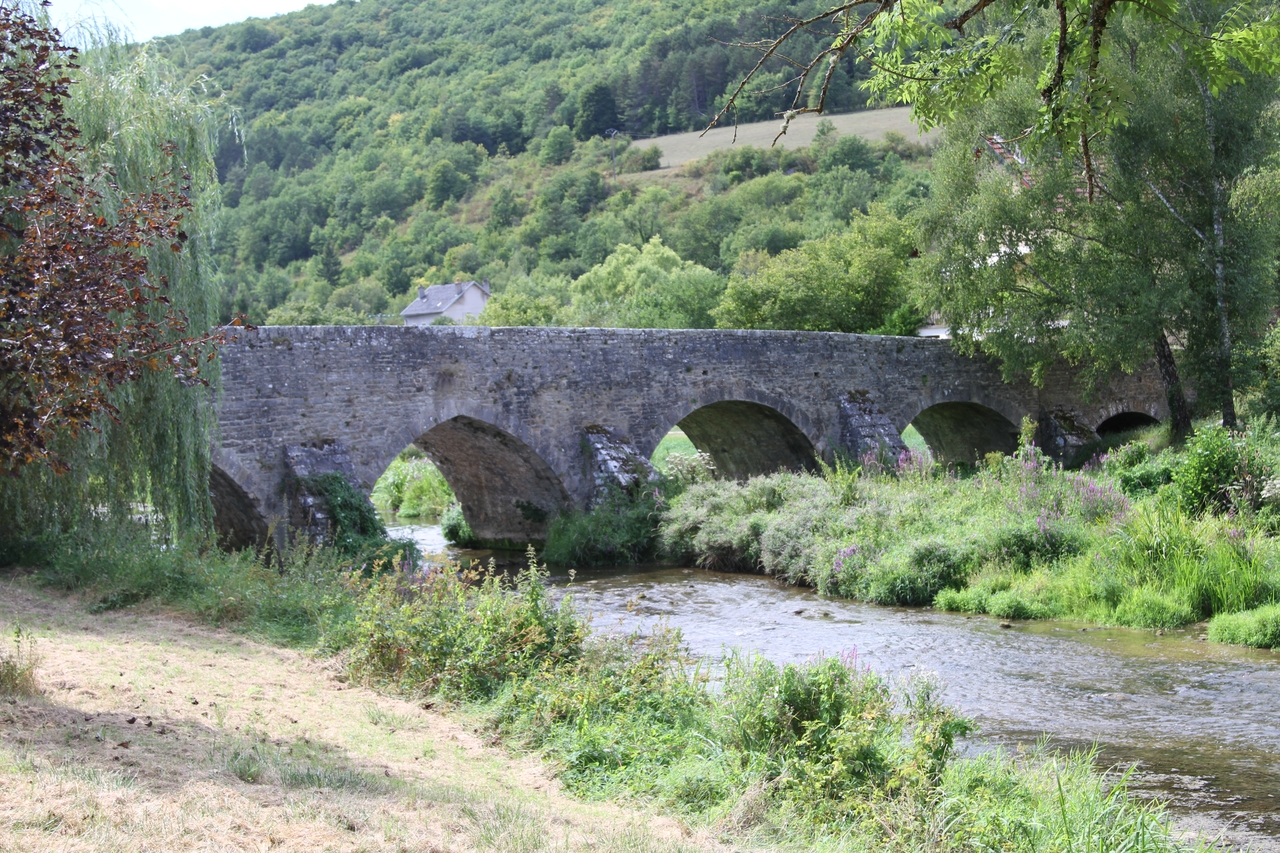 Most have a 13th Century Bridge and a 12th or 13th Century Church. At one of these, La Bussiere, we were able to catch up with the friend who had offered us the use her holiday home there when we first bought Anja and were equipping her. Jo lives in Switzerland now so it was a great pleasure to be able to spend time with her. We were also able to attend Mass at the Church there, part of a 12th Century Cistercian Abbey. Again this was reminiscent as we last were there when the Church was reopened in 2010 after many years of restoration.

We have been very surprised at the light traffic on the Canal, especially after the buzzing Saone. In particular there are far fewer British boats than the numbers around in both 2010 and 2105 when we were last along here. 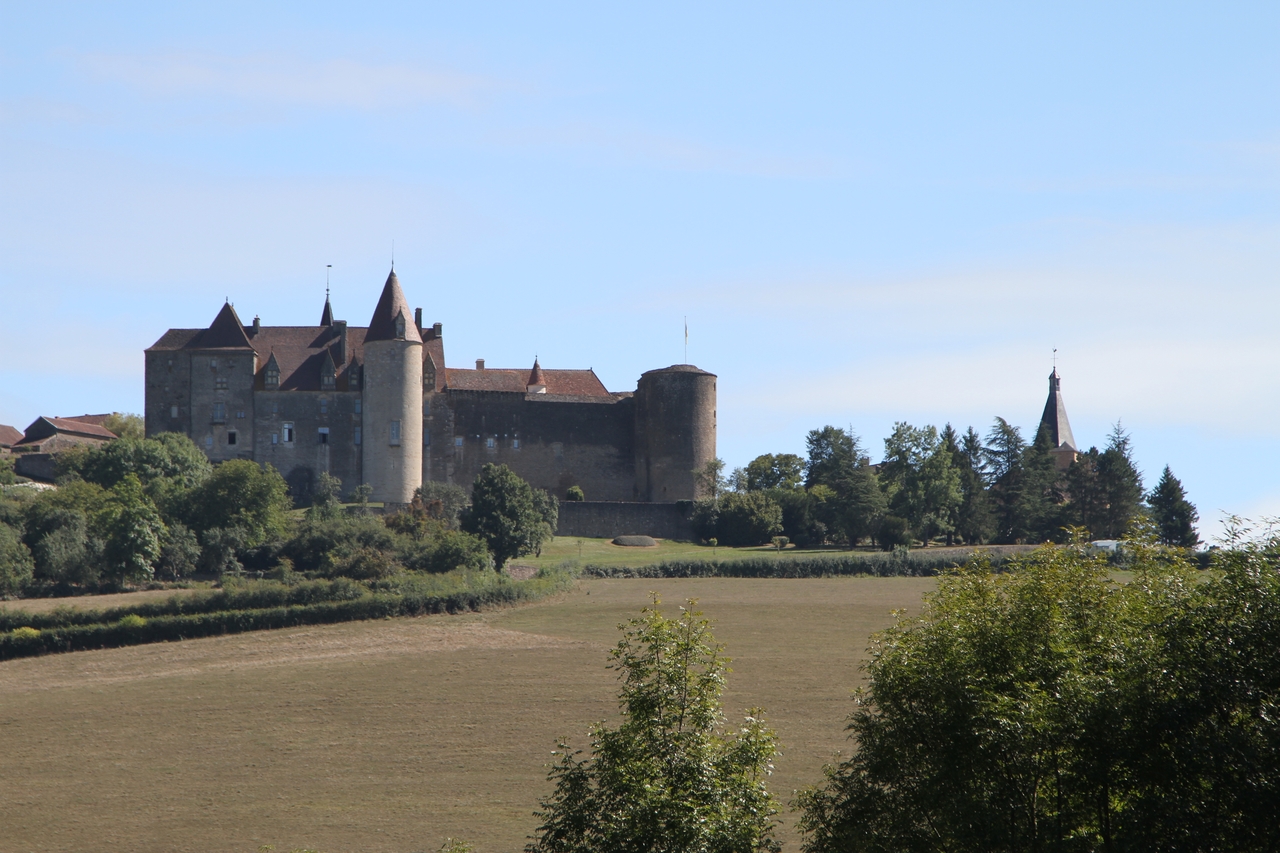 The magnificent mediaeval town of Chateauneuf

The main change in traffic is from Hotel Barges which operate mainly between Dijon and the pretty town of Vandenesse. They take priority and also use up many of the mooring spots which used to be available for people like us, fair enough when one considers how many passengers are involved and how much they are paying to be there but a little annoying. The number of hotel barges has increased significantly, even in the past two years. 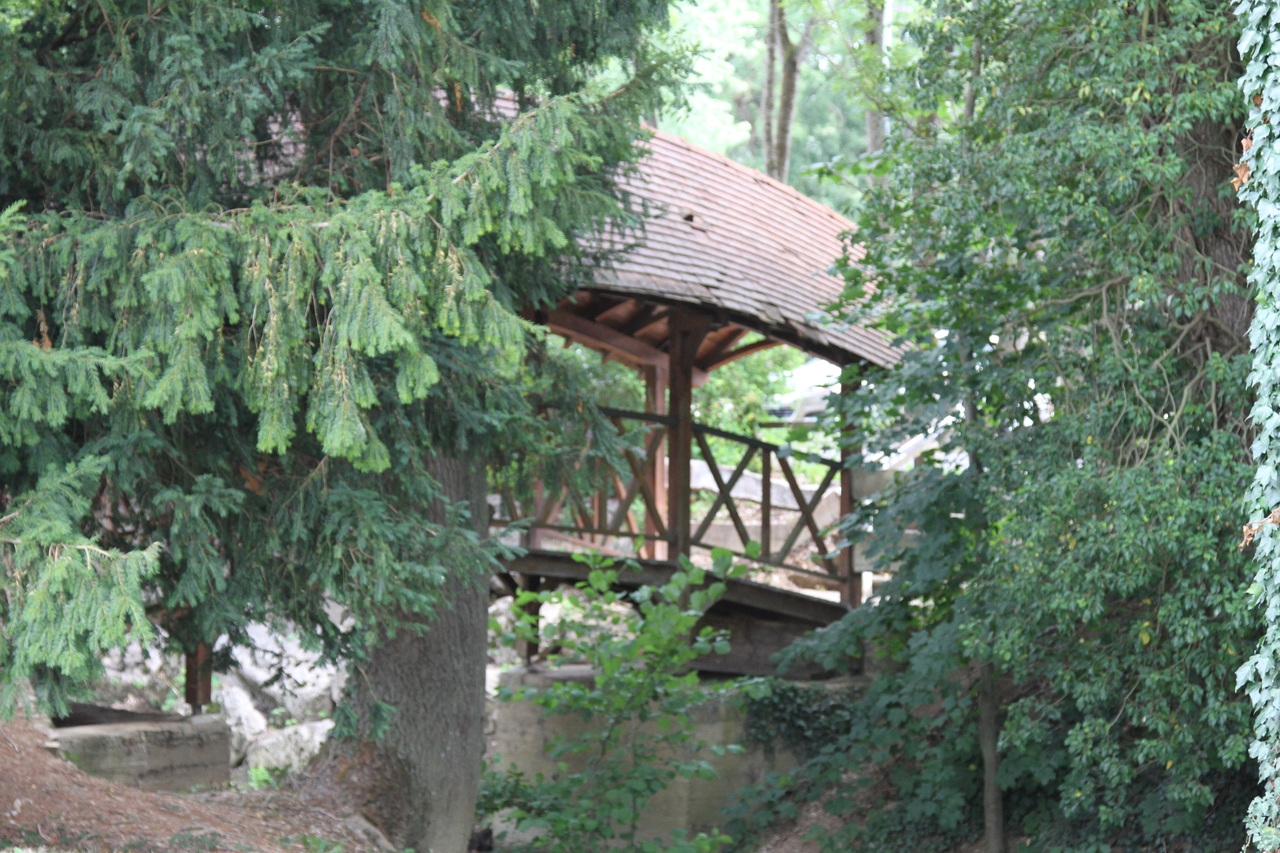 The big challenge on the Burgundy Canal is to get through the Pouilly Tunnel unscathed. We have twice attempted to do this, each time sustaining damage because our roof is officially too high at the edges to fit. In practice the canal is kept 20cms lower than the official height so we just fit as long as we keep within a few centimetres of the centre. This is easy to do for a brief period, but with the curving lead-in and lead out totalling 1200 metres and the Tunnel itself 3350 metres long, it is a very difficult if not impossible task.

The tunnel was built very early in the 1800s and due to its depth and length was not provided with a towpath like most other tunnels in France. It is basically a cylinder, with 50% under water and 50% above. Barges were pulled by people or animals so when they reached the tunnel, the people on the barges used to reach up to the roof with their fingers and pull the barges along. Wow! There must have been a lot of skin left on the roof and people would have had mangled hands and fingers. Imagine pulling many tens of tonnes through that tunnel. Next came steam driven craft. But the smoke made it impossible to breath and people died. Finally, towards the end of the 1800s, an electric towing barge was built and a heavy chain laid along the floor of the tunnel. The barge got its electricity from wires in the roof (like a tram on land) and pulled itself along the chain. A whole string of barges was thus pulled in one direction through the tunnel. The electric barge was reversible so it could then pull a string of barges back the other was. This device operated continuously for almost 100 years before finally being decommissioned in about 1983. Now, craft are allowed to pass through under their own power. There is also a purpose built electric passenger boat which makes four trips a day through the tunnel. It is fully electric and sixty solar panels on the tourist office are used to recarge its batteries after each trip. The solar panels are like roof tiles and hardly visible.

Anja is looking better than ever. There is a very busy bike/ walking/ rollerblading path along the canal so we are photographed and videoed many times a day. The geraniums are still in bloom and much commented on. Even the top of the roof which no-one can see will be getting a final two coats of paint to keep it in good condition. Just one tunnel, 155 kilometres and 115 locks to go. 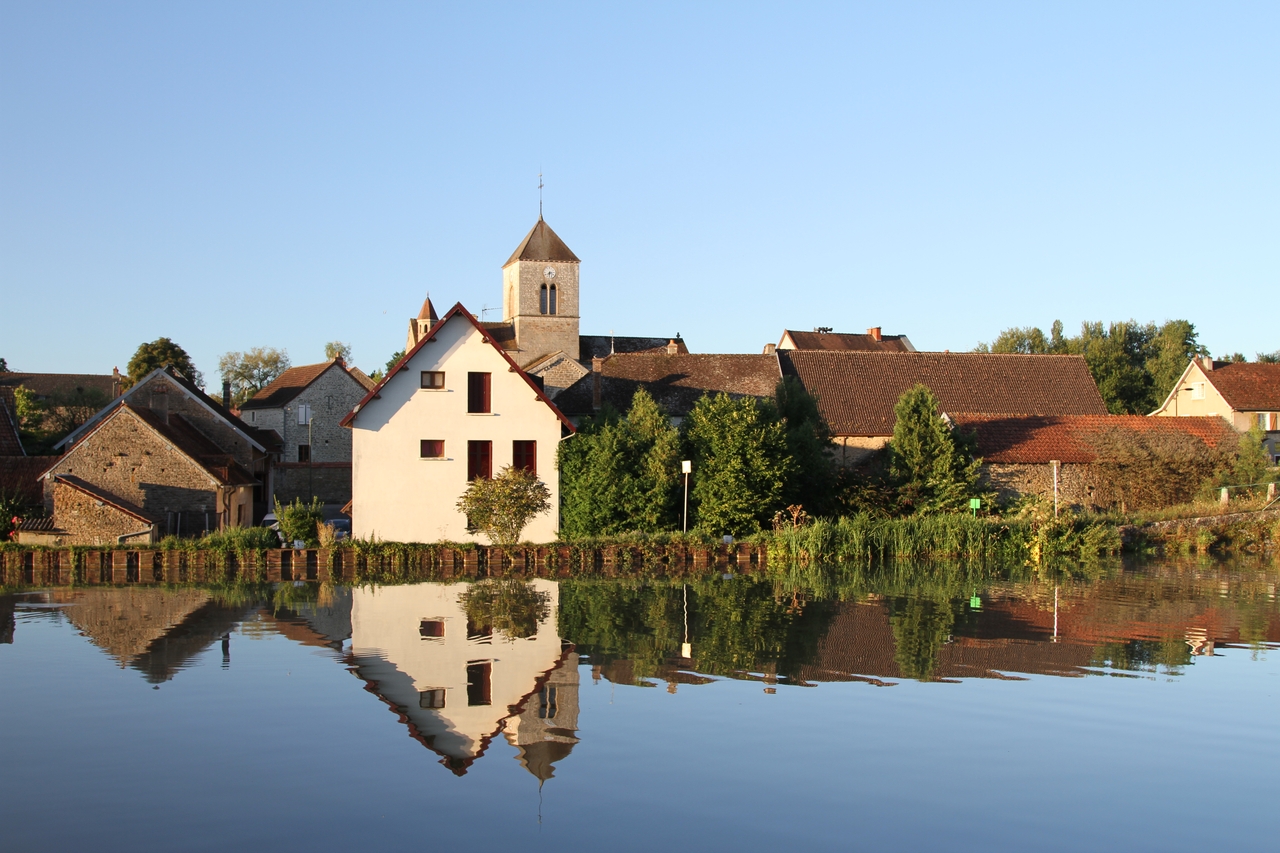 Tranquility on the Canal