Aug 16 Posted by Penelope and David Kerr in Barging 2017
Hello everyone, 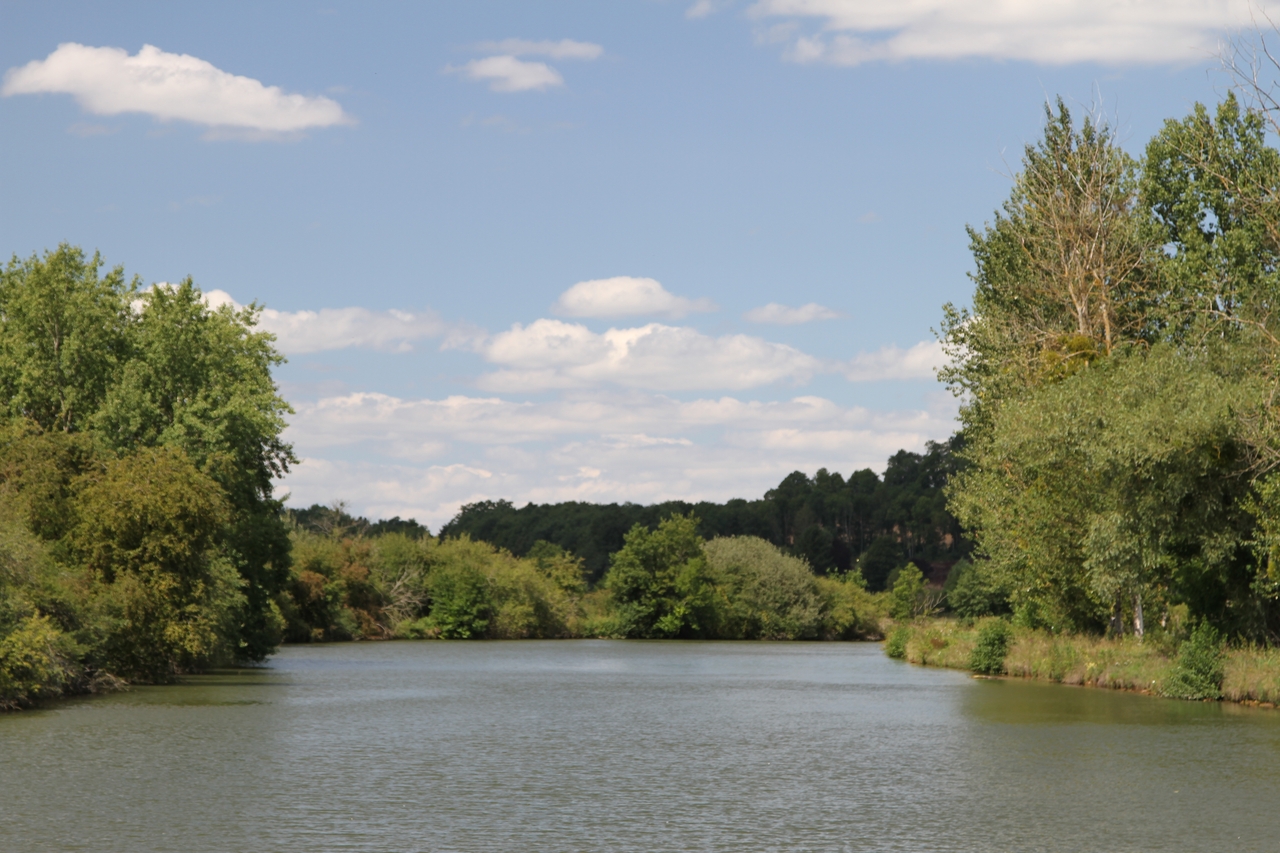 The Petite SaoneAfter the 122Km of the Canal des Vosges with its 91 locks, we were looking forward to the 215Km of the Petite Saone with only 18 locks. All went smoothly, but each lock was frustratingly slow because they are "automated" in such a way that they do not stay full or empty after a boat passes but always empty after a very short time. Great if you are going upstream but not downstream as we were and we experienced a lot of waiting around. There were also surprisingly many boats, largely due to the flourishing boat rental market. We counted 50 boats one day, the most we have ever encountered in a single day. This meant that stopping places were very oversubscribed and some of the rental boats were in places we would not stay due to possible boat damage......but people in rental boats do not seem to worry too much about scratches and dents. 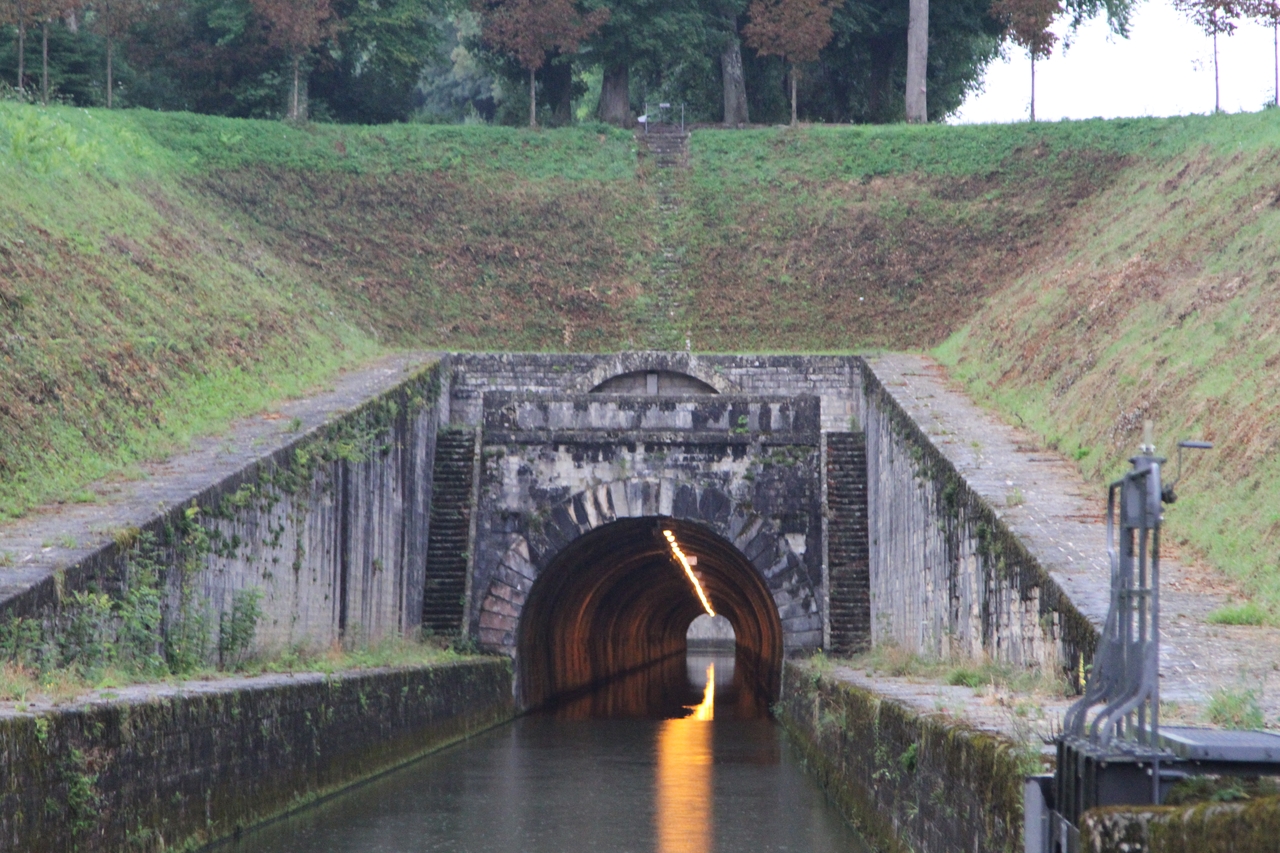 St Albin tunnel- only 700metresWe passed through another two tunnels taking our tally this year to six with the most difficult to come, the Pouilly tunnel on the Burgundy Canal. 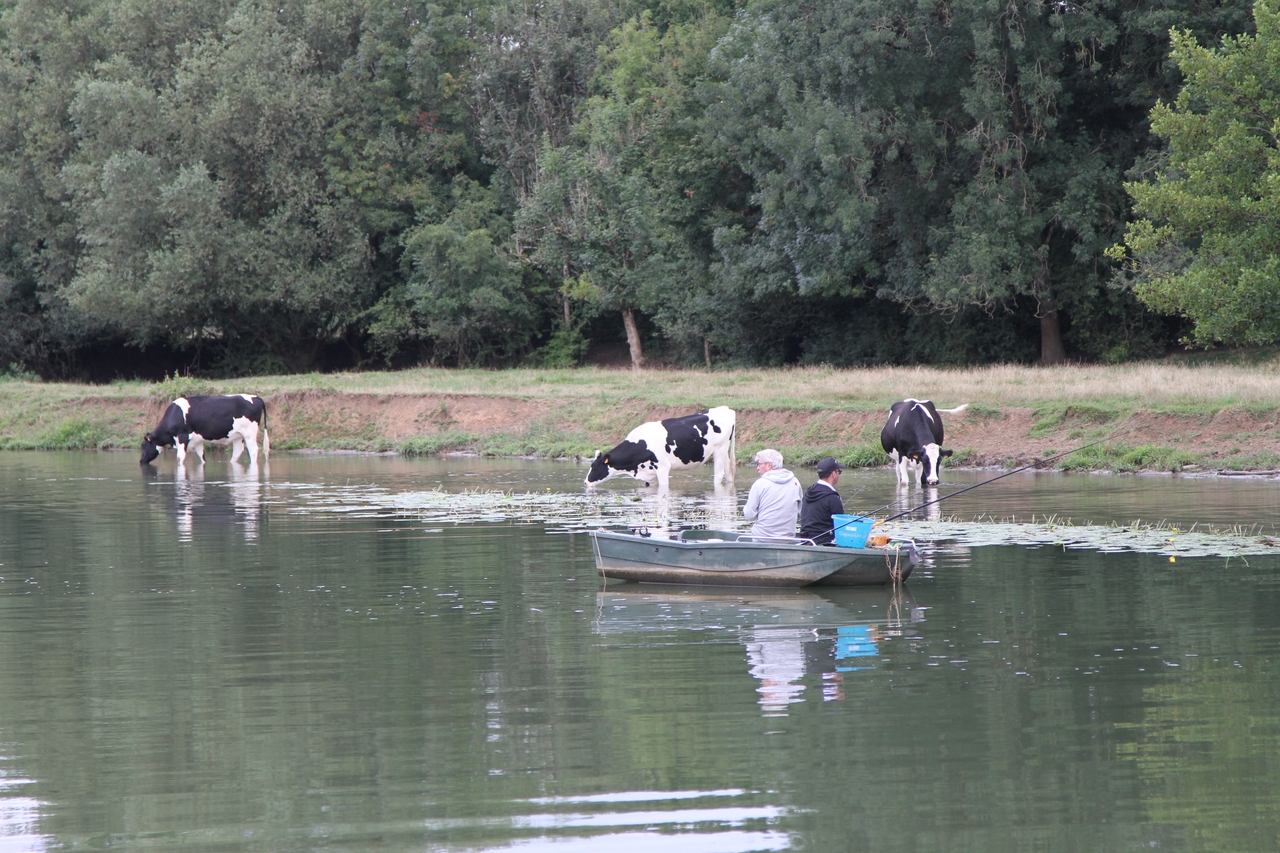 Sharing the Saone with fishermen, other boats.......and cows!We had previously travelled on the lower reaches of the Petite Saone, but had not travelled its full length. This time we started at the first navigable section of the Haute Saone (high Saone). So now, we have travelled the full length of the Saone from its start until its finish where it joins the River Rhone near Lyon. Thus, we can tick off another of the great rivers of France. There was almost no current in the river because the extreme dryness continues and there are very severe water restrictions in place in all the towns. 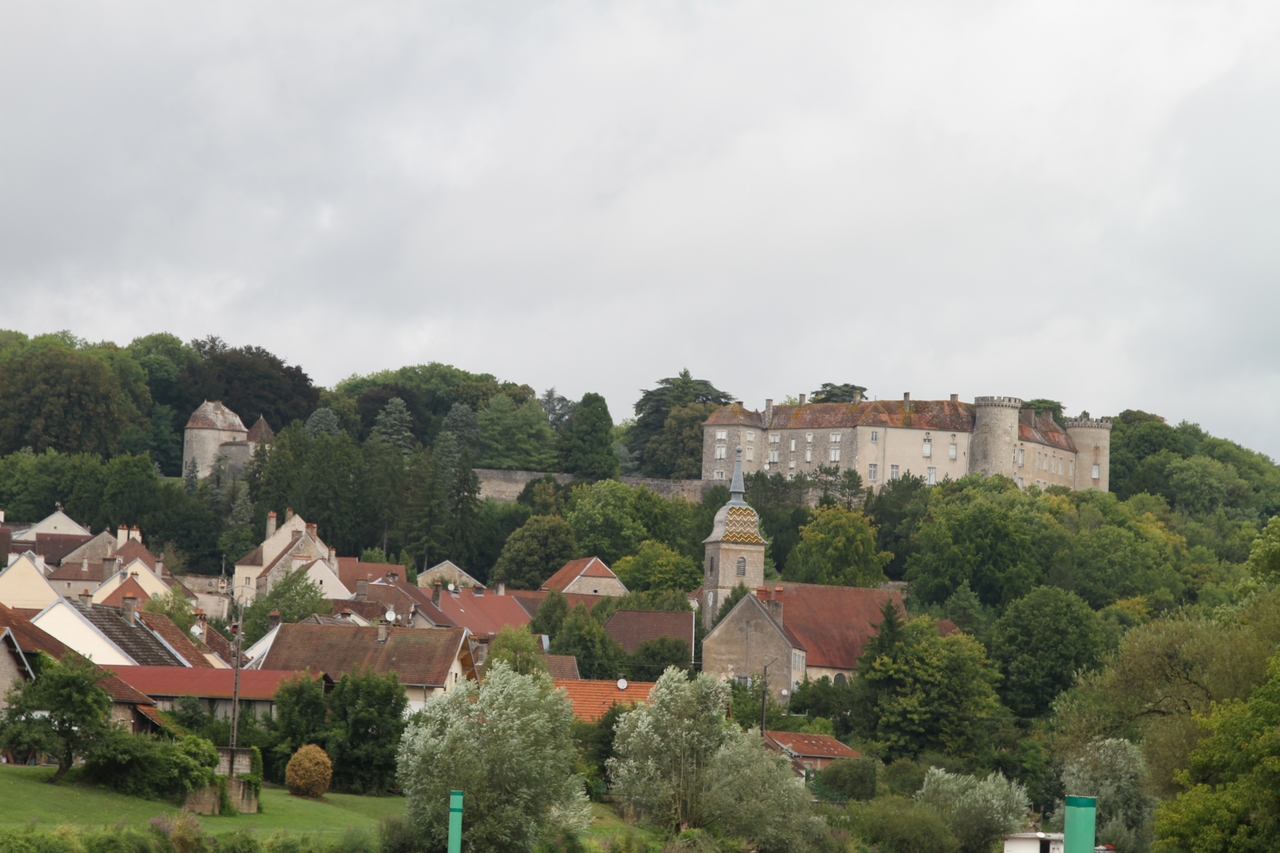 The small town of Ray sur SaoneWe visited delightful places along the route. As usual, there are little gems of information to discover. Such as at the small town of Ray, where the inventor of radio direction finding (and the first RDF device) lived, died and is buried. In this village, we dined at "Yvette's Place", a small but popular restaurant which grows its own vegetables so that the menu is very much dictated by what is ready from the garden. We were served a big slice of Rockmelon to start things off. They have a glut of Rockmelons at the moment, so were serving it wherever possible. We also bought one to take back to the boat. They also served Bison, which we have never before encountered on a menu, so we felt compelled to order it and it was delicious. We asked if it too was grown in Yvette's garden but no, it came from a farm 10Km away! 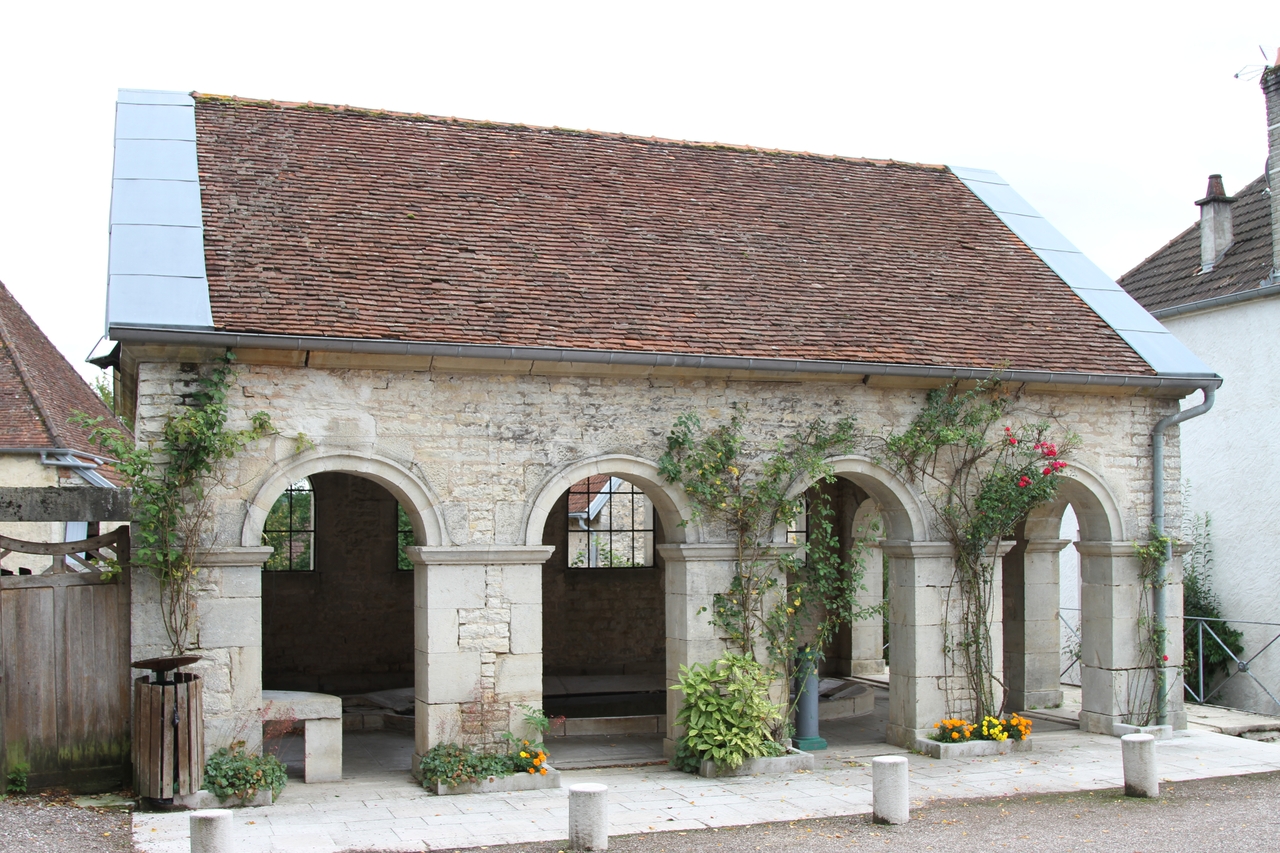 The lavoir at Ray (for clothes washing) 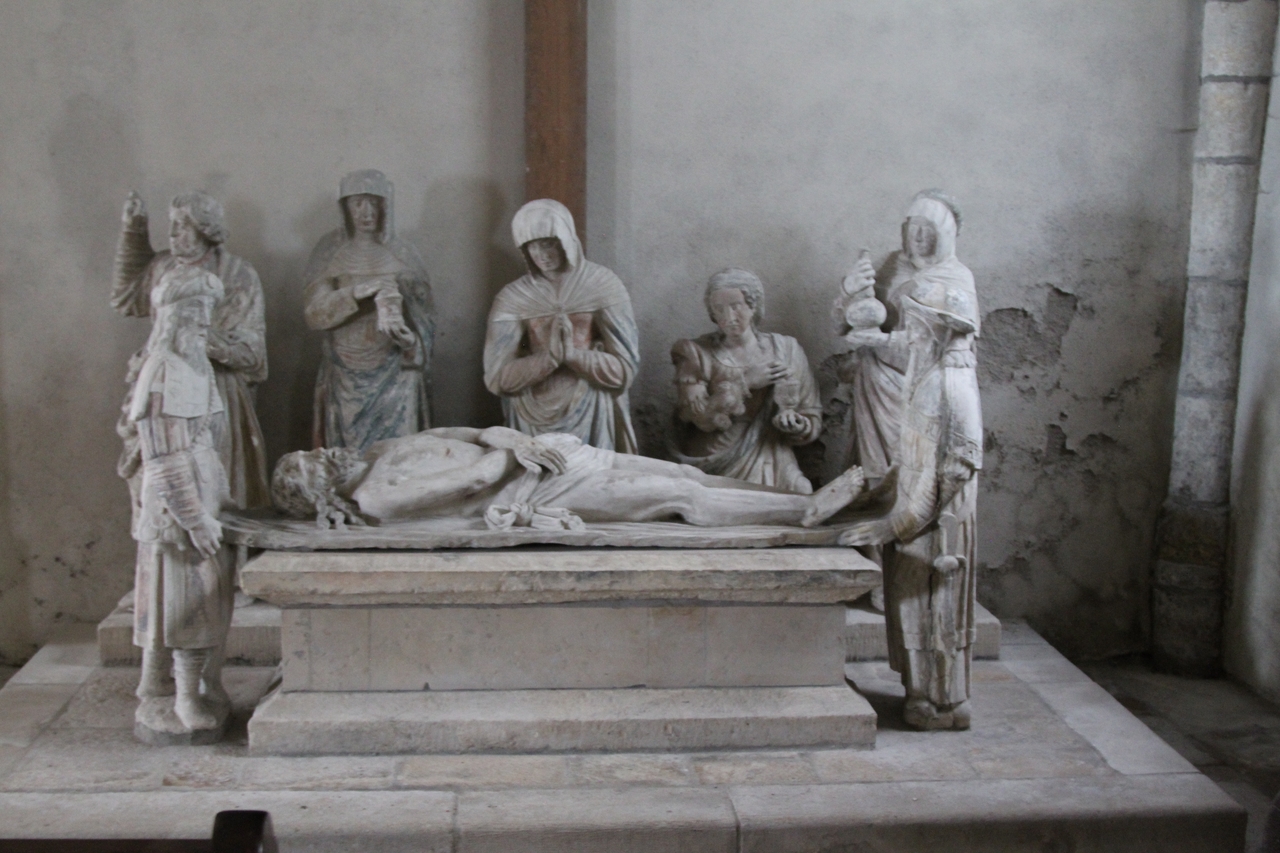 Mise au Tombe, Ray 16th C
We stayed at the delightful village of Chemilly, population 87. It has a large chateau which is in the process of renovation plus a 13th Century bridge with a full size statue of St. Nepomucene who is the patron saint of bridges (in France). He was thrown off a bridge and drowned in Poland. 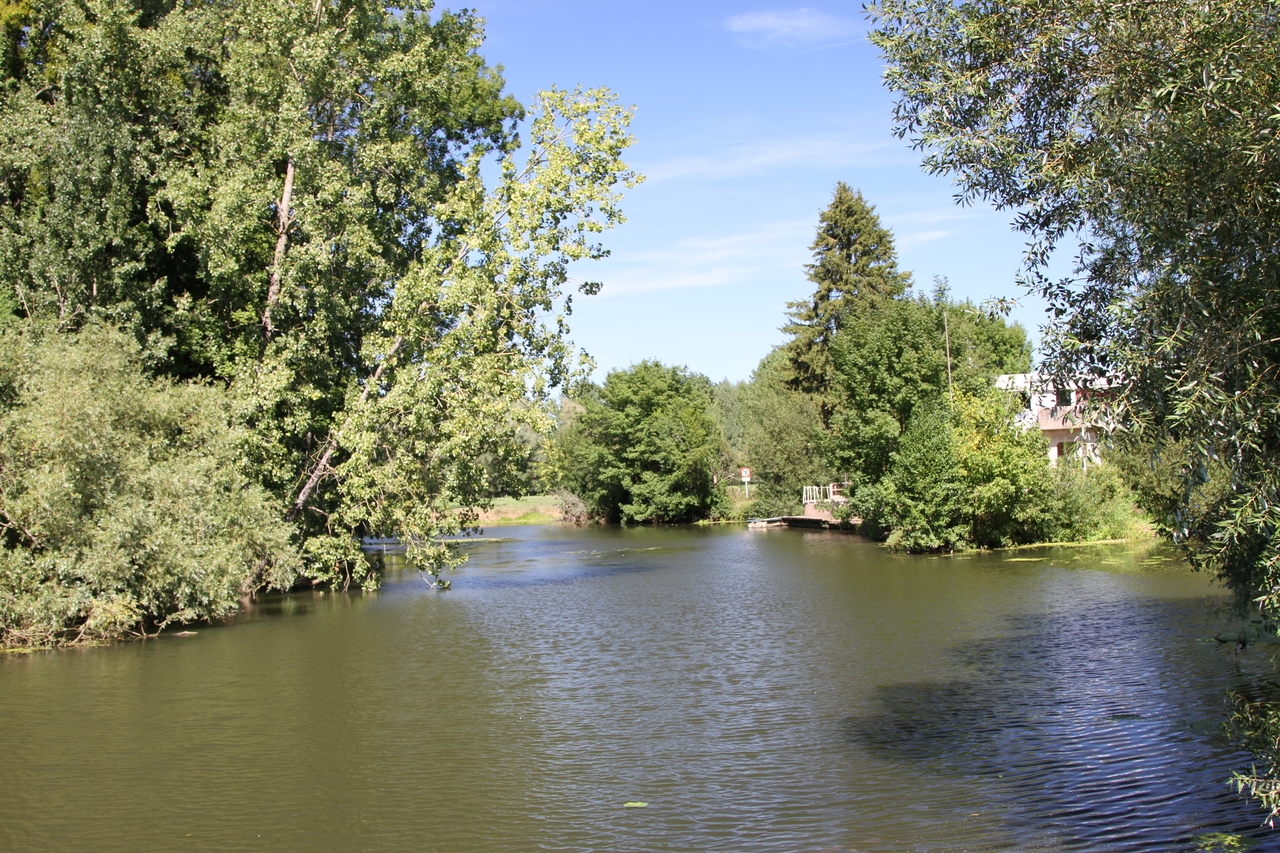 13C Bridge with the Patron Saint of BridgesBeing peak vacation time, there are people fishing everywhere (it is one of the top pastimes in France). Very rarely will you see anyone catch anything and they will often throw back the live catch at the end of the day. For instance, someone fished near us for about 10hrs the other day, keeping the fish in a large circular storage net and then releasing them at the end of the day. However, at Chemilly, two young men went out in a boat and fished near us one afternoon and caught a large fish which they measured very accurately. It was 1.3metres long. The fisherman was very proud of his catch and gladly posed for a photograph of it. 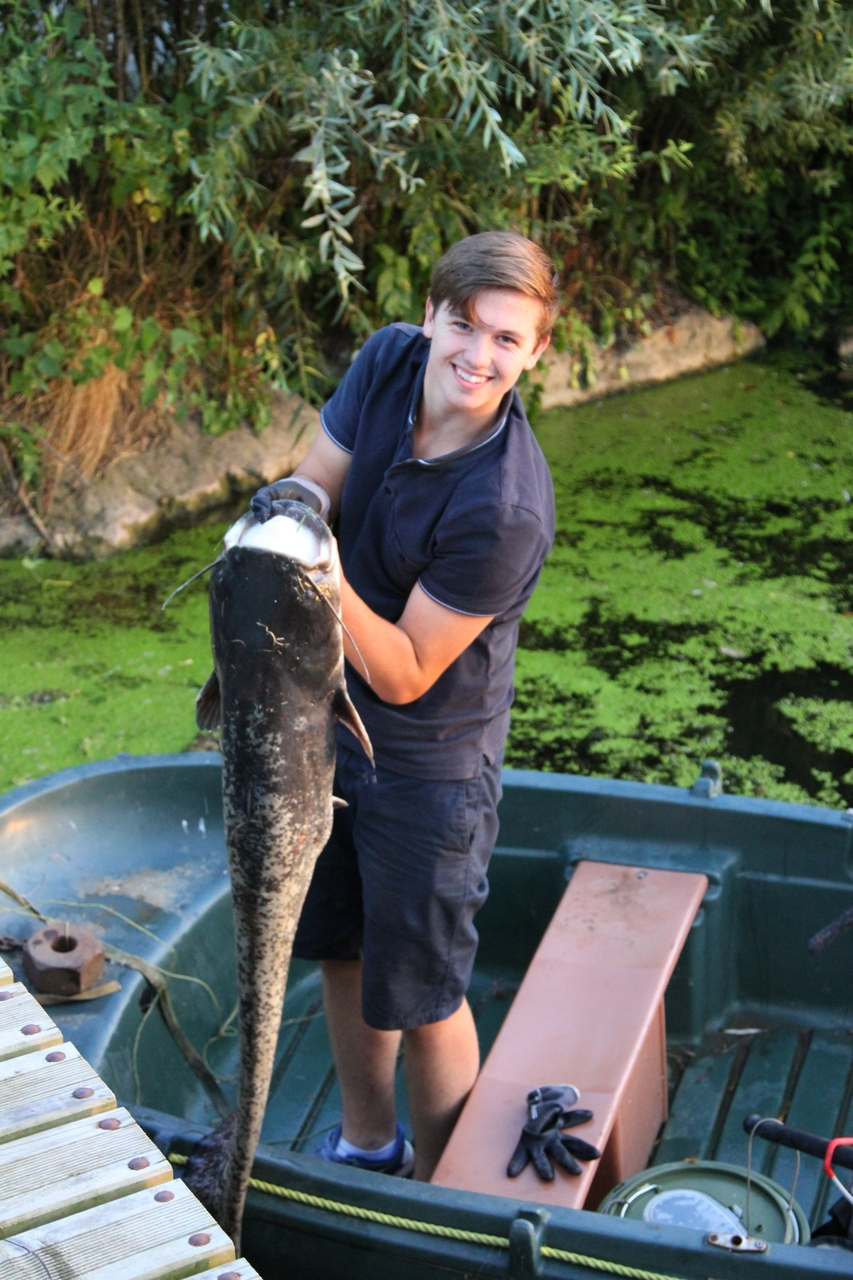 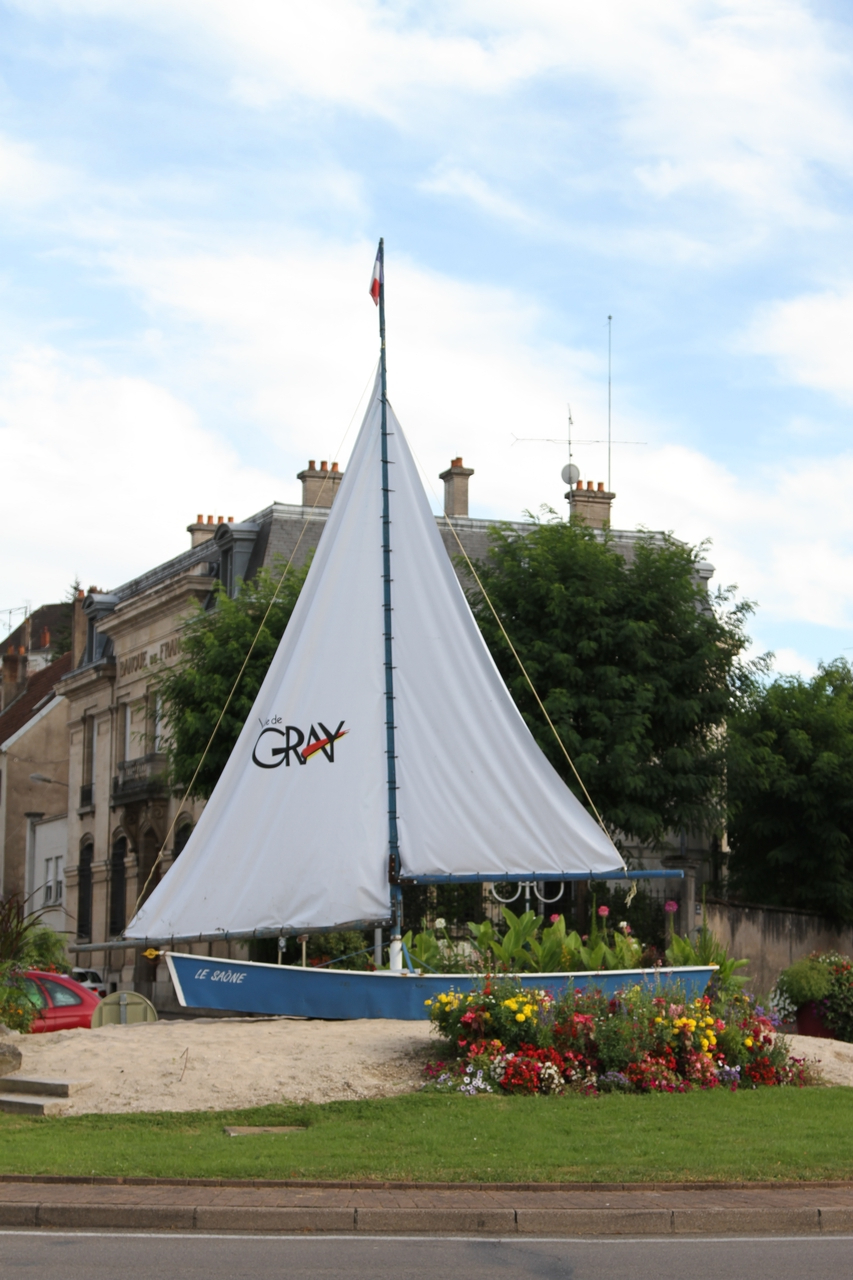 Roundabout (Rond-Point) at GrayOne of the larger towns along the river is that of Gray. We have previously visited it a couple of times and been struck by the marvellous roundabouts. Many towns in France decorate their roundabouts and we have seen some wonderful displays. But consistently, it seems that Gray puts huge effort into it. One roundabout had a Grandfather clock, huge cheese wheel, cart loaded with wood, casks etc. It was displaying the produce of the region and had a welcome to visitors (on the cheese). The other carried a summer theme with a sandy beach and a sailing boat complete with sails. Fantastic! 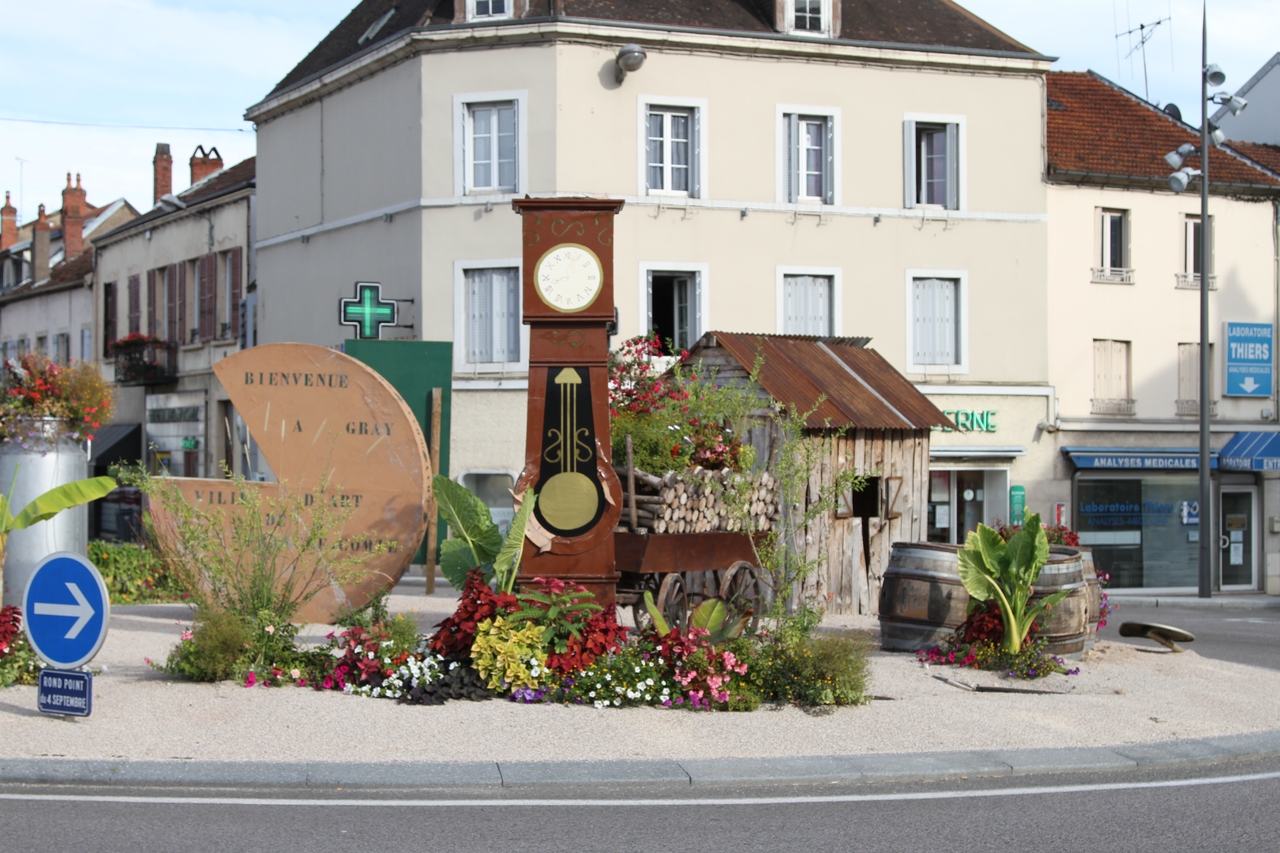 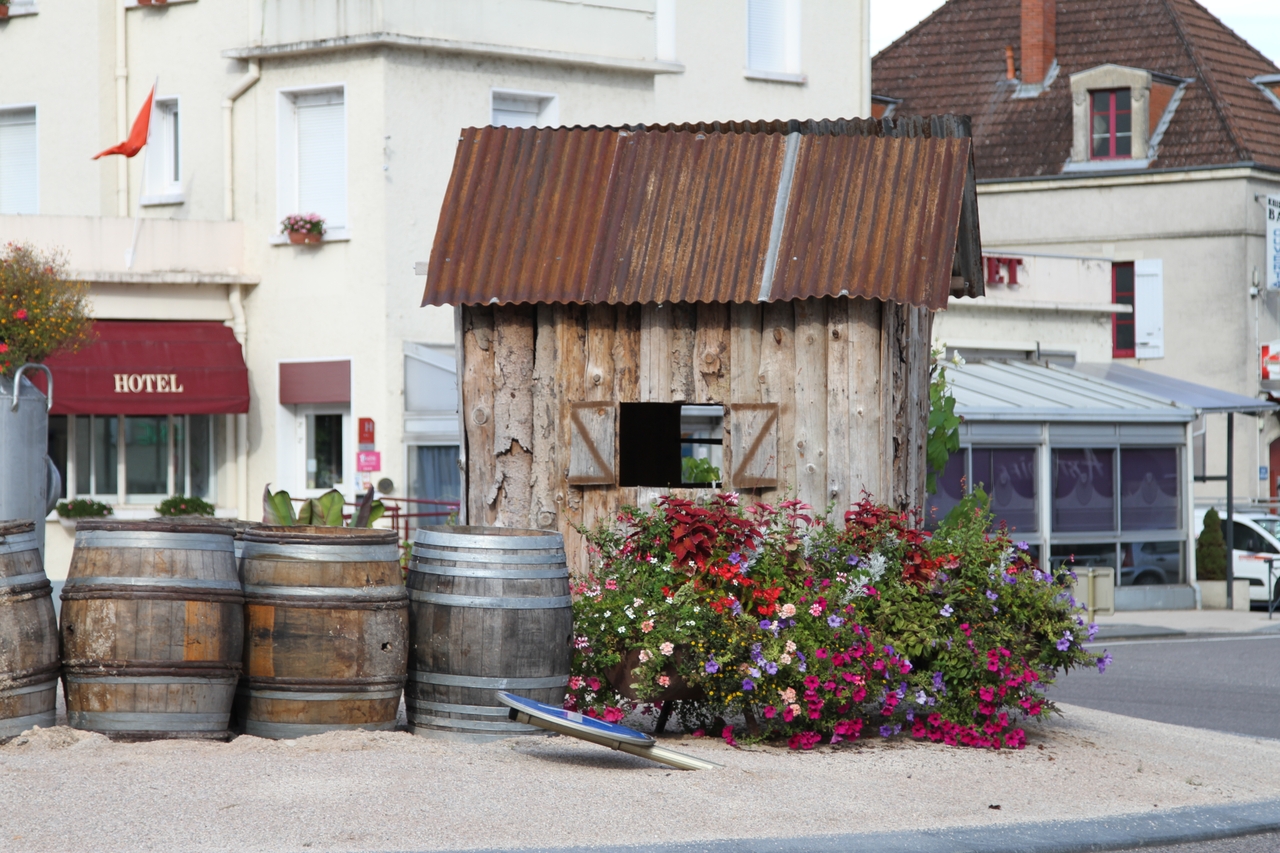 While exploring another small village along the Saone, Montureux, we found our first ever outdoor French bowling alley. This was a little different from the Americal indoor bowling alleys with polished wood floors. This was outdoors with a concrete alley and very substantial wooden structure at the end to restrain the balls (perhaps they use old iron cannon balls?) The positions for the ten skittles or pins are marked on the floor. There is a wooden strip at the start so that the balls do not immediately hit concrete. At the end, someone picks up the balls and places them into a runway made of steel tubing and they return to the start. 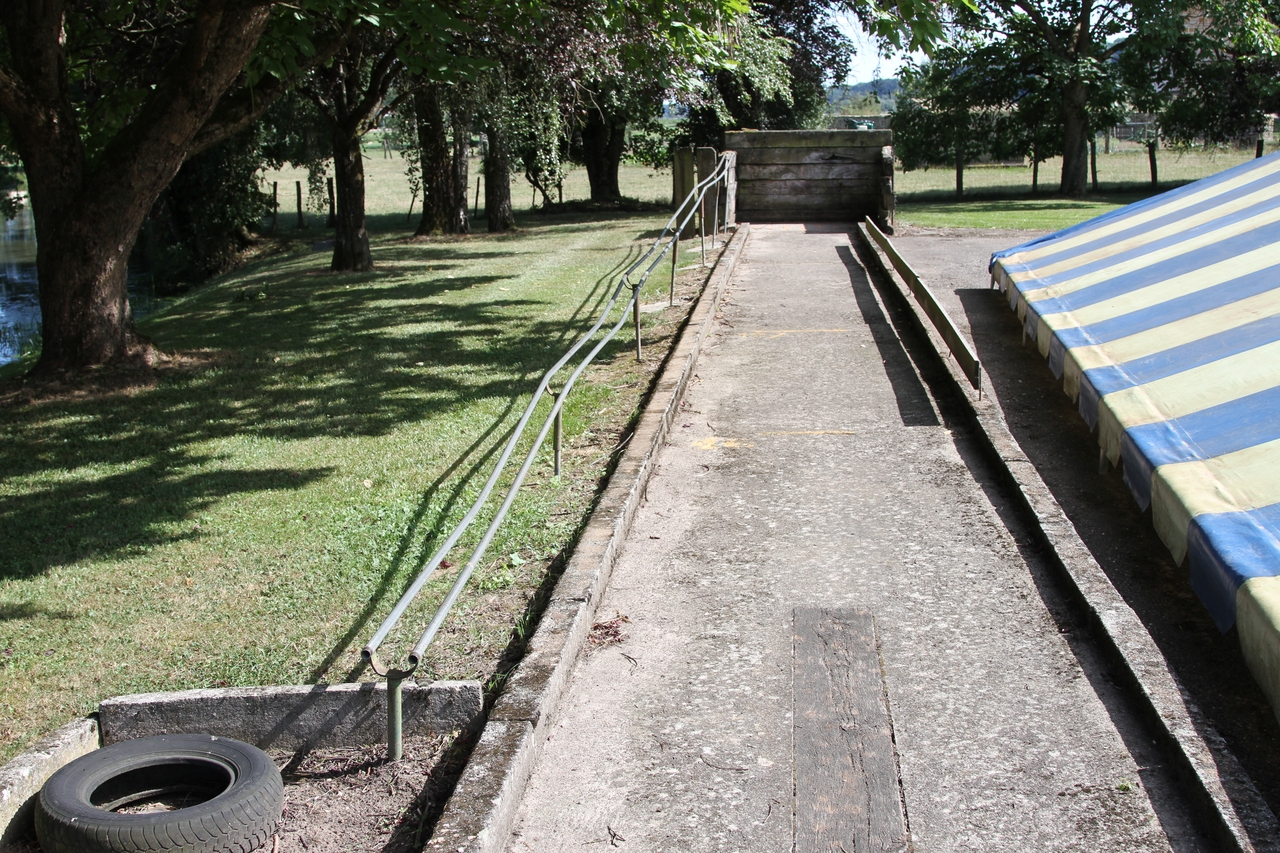 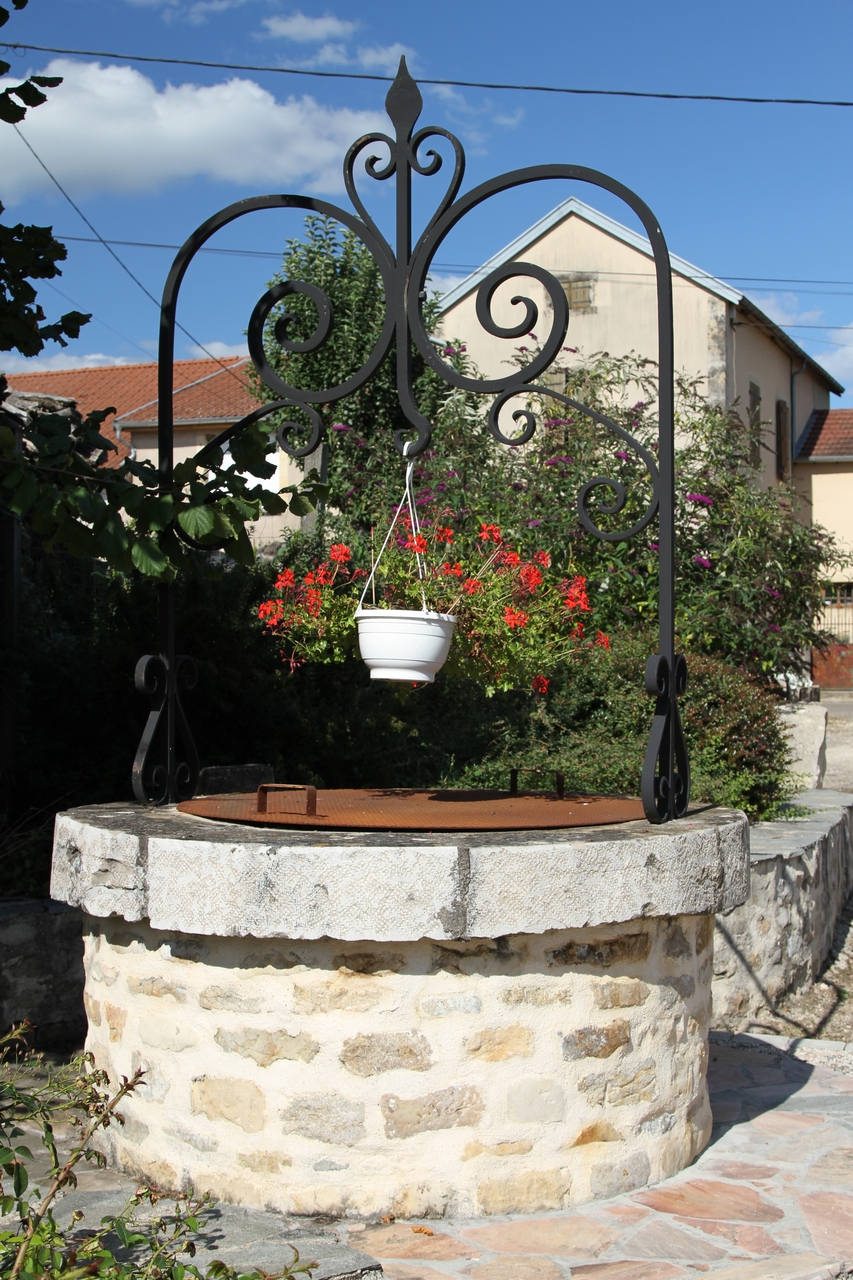 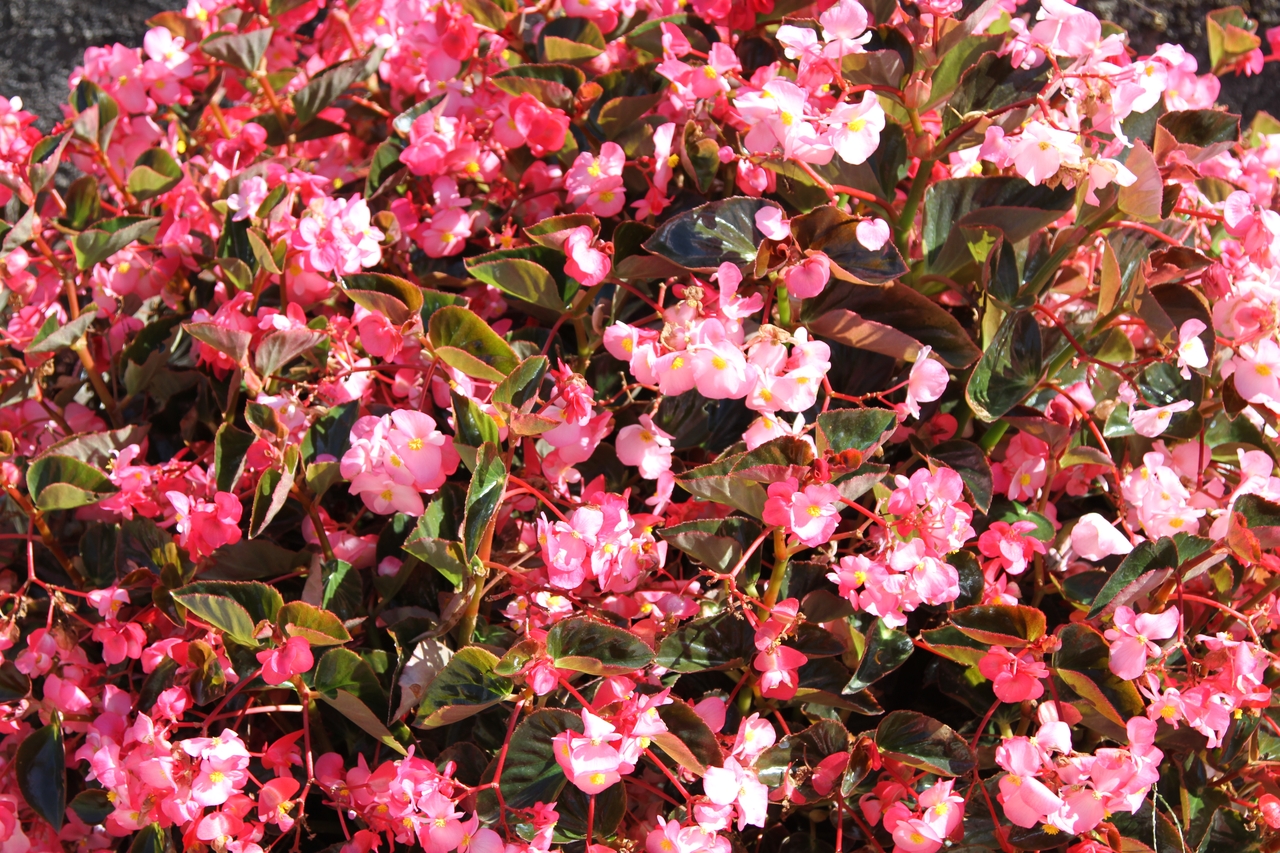 Flowers at Montureux After the Petite Saone, we start our final Canal, that of the Bourgogne. 242Km with 189 locks. Unlike most rivers and canals in France, these are the original locks with the original levers, gears and other mechanisms. So, almost without exception, they are manually operated.