Happenings on the water

Jul 01 Posted by Penelope and David Kerr in Barging 2017

We have been through the first two tunnels of the year and for the last week we have been on the "narrow gauge canals".

A clever guy, Charles Freycinet, 140 years ago, created a standard size for the (French) canals, locks and barges carrying freight. This standard (which was put into French law) has more recently been adopted by the EU and 23% of barges are this uniform Freycinet size. Nowadays there are additional standards for modern-day (huge) barges. Basically, so-called Freycinet barges are 5.1metres x 38.875metres. The locks are 5.2x39 so there is not much room to spare! Here is a slideshow of such a barge going into a lock.

We have 40cms clearance on each side when we enter a lock, which is not much when you are steering a flat bottom boat of overall 18metres length, weighing 36tonnes, sometimes with cross currents at the entrance, strong winds or difficult angls of approach. So we are constantly amazed at the skills required to pilot 360tonnes into a small lock with only 5cm (or less) clearance on each side.

We have been going along well, with no problems. Others have not been as fortunate. For instance, feel sorry for the people who bought a boat then, two days later, filled the fuel tank with water. We met a couple who had a most unfortunate accident last year in the Netherlands. An inexperienced person was operating a bridge which rotates horizontally so that two boats can pass at once. She forgot about the second boat and closed the bridge which swept across the boat demolishing the wheelhouse. The driver of the boat was lucky to survive with all the windows smashing and giant slivers of timber flying around. The Dutch town took responsibility and paid the $50,000 repair bill but it was the end of that year's cruising and took a lot of time (months) to repair. Another person was stuck at a quay on the Yonne River because his steering had failed. Yet another had plumbing and electrical difficulties. All we have had to do is replace one tap washer, so we have been fortunate.

A few days ago, we had stopped for the day. A German boat came through. We had previously encountered them and assisted them when the battery in their remote control for the locks went flat. They borrowed ours, which cost us about half an hour extra and they did not even say thank you. Anyway, a short while later, they came back, reversing down the canal and said it was blocked. Penny helped them moor and again they did not even say thank you. A bit surprising because people are normally very polite. We think they were always in a hurry and on each occasion when they needed help, they were in a bad mood because they were held up. There was dredging further down the canal, which is not normally a problem. Anyway, a short while later, a commercial Freycinet barge which had clearly been involved in the dredging, also came backwards down the canal. The skipper called out to us and asked us if we could please move our boat further upstream. Then  a second barge further back positioned itself mostly across the canal. They "caught" the first barge when it was close and then manoeuvred it to where we had been and we assisted the skipper in mooring up. He looked fairly frazzled. David asked him what was happening and he explained that his propellor had broken off! He also mentioned that he had been able to retrieve it. Heavens knows how he would have got it back, but perhaps the dredging barge was able to scoop it up (weighs about 100kg). The poor guy was very agitated and thought that repairs might take 10 days (during which he would be earning nothing). He checked the depth of the canal, moved the bow out from the edge and filled the front of the barge with lots of water so that it was sitting on the bottom of the canal. That enabled him to get the stern a long way out of the water and close to the bank so that he could examine it. He spent quite a bit of time "talking" to the rear of his barge, probably asking it why it had failed him and what was he going to do. This was accompanied by lots of arm waving. Penny felt sorry for him and sent him a bag of beautiful cherries which we had got at the Chalons Market. He was very appreciative. Then, a few hours later, his wife and small girl arrived and gave him big hugs. Followed by more relatives who brought him some extra food. So, he was comforted, but it looked like a difficult situation. Hopefully someone can come and assist soon or they can figure out a way to get his barge through about six locks and 20kms of canals to a repair place. Here is a photo. 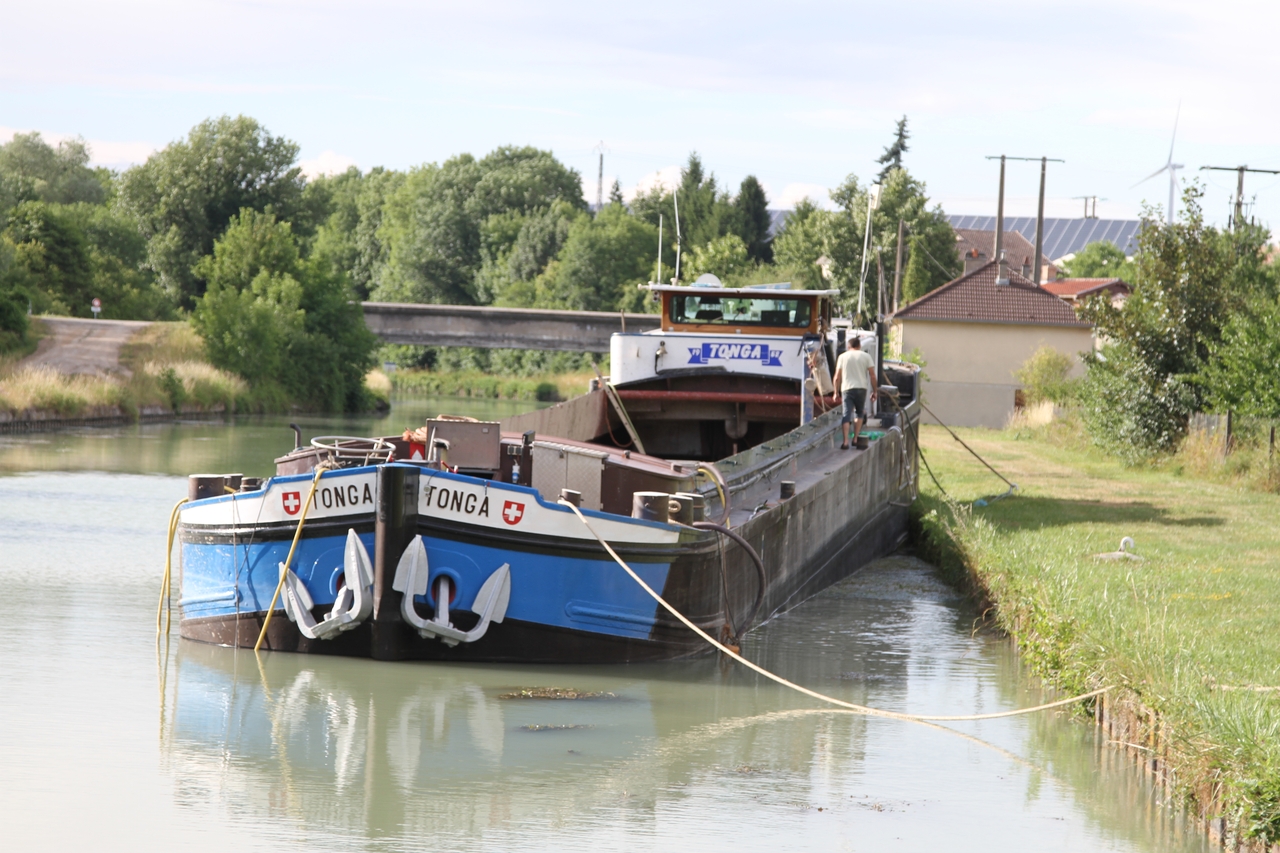 Nowhere to go with no propeller

Recently, the canals and rivers have been far busier than the last couple of times we were in this area. There are a lot of Dutch boats and also more French boats than in previous years. Perhaps the latter reflects an improvement in the French economy and peoples' ability to go boating? Many of the smaller boats always hover around places where there is free electricity and water but even places without that are fully occupied. We were at Chalons en Champagne a few days ago and the port was full, so we stopped near a lock within the town. This worked out well because we were able to go to the market the following morning. Anyway, a fully loaded barge arrived after the lock was closed and "rafted up" to us. It is very rare for a commercial barge to come alongside a private barge, but all worked well. The wife drove very carefully and the barge which was twice our length and 10 times our weight touched us so gently that you could not feel anything. Just like a perfect landing in an aeroplane! Here is a photo of it. 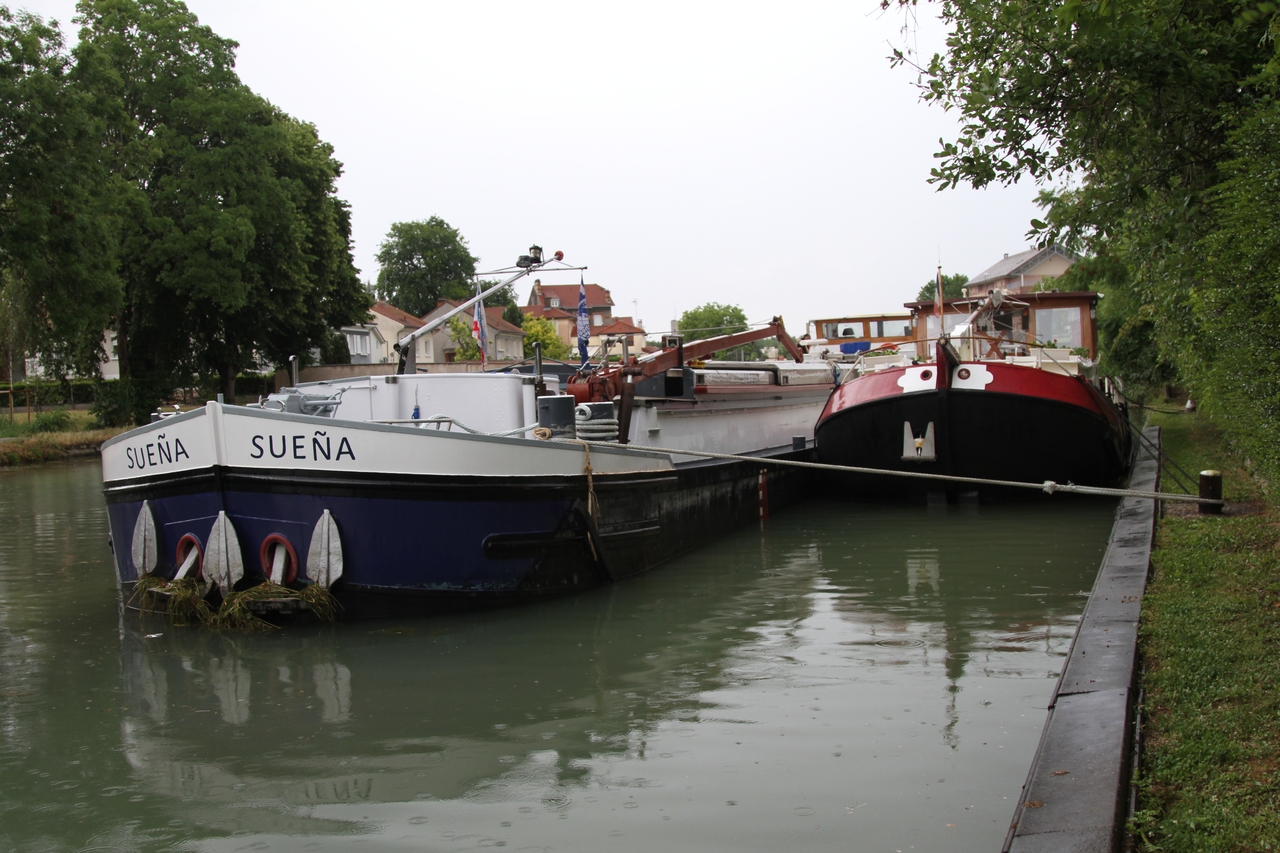 The young couple was very polite. They were carrying rolls of electrical wire to the Northeast. We crossed their path again this morning as they returned unladen from delivering their cargo. 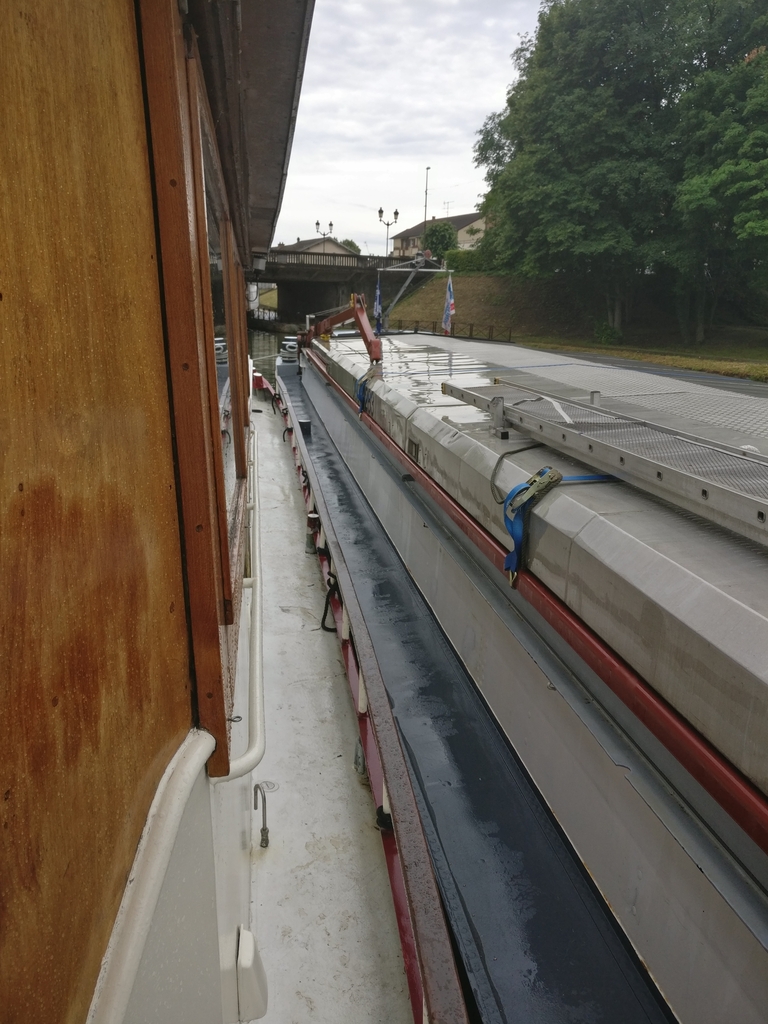 View along the side

The main issue at the moment is the unusual and unseasonal lack of water. There are water restrictions for households and for agriculture. One of the canals is closed due to lack of water. Most canals have restrictions requiring boats to be aggregated for going though locks. Depths (particularly affecting yachts and boats which draw more water than us) are restricted in many places. Even the major rivers are experiencing difficulties. We have never encountered this previously and the drought appears to be a very rare event so early in the cruising season. Last year, there were massive and unseasonal floods, which were very widespread. Anyway, we are being careful with our route because we do not want to be "stuck" far from where Anja lives over winter. We have had some rain in the past couple of days, but not enough to fix the shortages.