Drama on the High Seas!

Aug 07 Posted by Penelope and David Kerr in Barging 2012

***UPDATE: After a fantastic repair job by BOOST Shipbuilders, we are again under way and back in France***

Well, now we have your attention, it was not on the "High Seas" but on the Mosel River in Germany. This is a very large river and it can be dangerous.

We had not been able to stay where we wished (a place called Bernkastel) because there was no available space. We had travelled up-river to the Trier Lock. There is a lot of dredging occurring here; they are using large bucket scoops to dig out the river bottom in order to widen the river just before the lock. We went up to the normal place where you can wait for the locks as there was a large ship coming down. However, a new sign had been erected to say that it was no longer possible to use that space. On top of that, the river area for waiting was also effectively closed off by the earthworking. 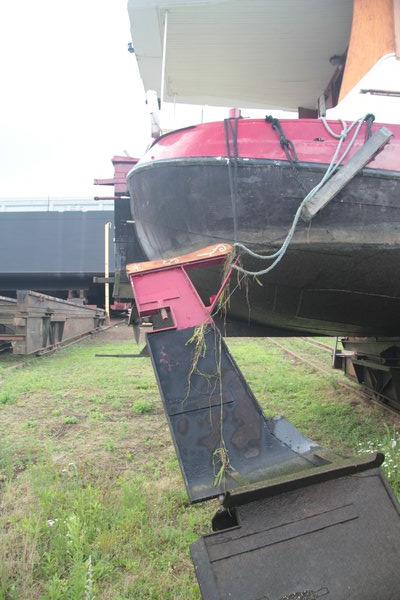 Being dragged out. Luckily we saved the rudder!

So, we had to wait on the other side, beneath the barrage which is usually a good place to stop before locks. It was very busy with ferries and other boats. There were also rowers plus a current and a strong wind. Even though we were 60 metres away from the shore and in an area with no warnings or channel markers, we came aground with the rudder perched on what transpired to be a block of old concrete dumped presumably many years ago. Ironically, there was deep water more than a metre deeper than where the rudder was, everywhere else around the barge.

We discovered after the event that the fundamental problem was that the river level has been lowered 46centimetres from normal without any signs or adding of new channel markers. Last year an English boat had the same issue in the same place but wrecked their rudder, both propellers and both drive shafts. 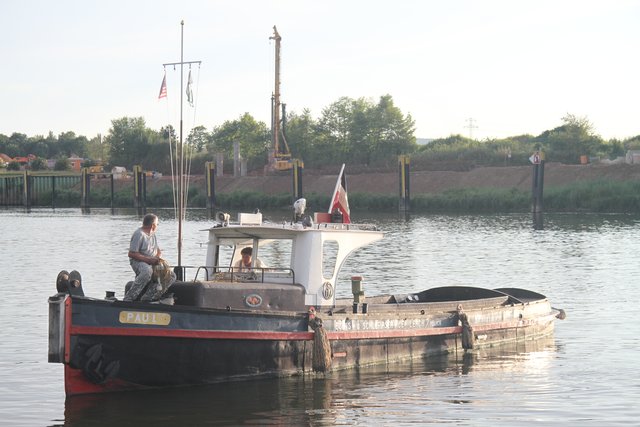 So, normally we would have been okay in this part of the river which has no indications of problems. To compound the issue, there are some jettisoned concrete blocks from long ago and it was upon one of these which we sat. The locals seem to know of the problems so it is a pity that the information is not posted somewhere. Of course, we found out all of this information the next day. To compound the issue, the river level changes up to 11cm. We went aground when there was a temporary high and then it dropped a further 11cm making things tougher.

Basically, we could not get the boat off by ourselves and a helpful rower in a scull volunteered to row back to his club and ring the Polizei. They duly came.

The police would not  tow us. They also prevented other boats coming to our assistance saying that they did not want anything to go wrong. So, we had to get a tug to come 30km (3hrs plus) with a costly quote of likely expense. However, they were very cooperative and departed within minutes of our phone call after the Police had rung them and given them the details plus our telephone number. Thank goodness for mobile phones! Basically, the (quite small) tug boat  achieved little. Their single thin tow line broke so we supplied our own decent long ones and these were fine and they did move us somewhat. They worked at it until almost dark. Then the Police decided to act as they had been with us the whole time and did not want us sitting in the river there over night. Their much more powerful boat dragged us off quite easily, but we shot off the first concrete block and over (presumably) another one nearby. Everyone's euphoria was quickly dampened when we noticed that our (very large/heavy) rudder was very lopsided and disabled. 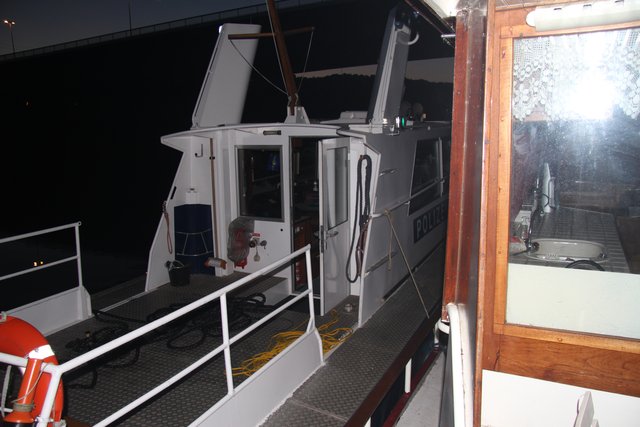 Polizei boat lashed to our side

Very, very fortunately, we got a mooring line attached to it in case of further problems. Then the tug boat tried to tow us but could not steer with us attached. This was with lots of flashing police lights and 4,000 tonne barges plus large ferries going past.

So, the police boat got onto one side and the tug on the other and they started pushing us down the river. The next drama occurred when the rudder completely broke free but remained attached by our sturdy mooring line and being dragged behind. The tug boat had to drop off as we approached a Roman bridge, the basic structure of which was built by the Romans 2,000 years ago! The Romans did not allow enough room for anything exceeding 12metres in width under any span! It was very skilful driving by the two boats to go along the river at night in this manner. Neither skipper could see the other. However, we had a Policeman on our bow and he was able to coordinate the effort. Everone was very nervous under the bridges. 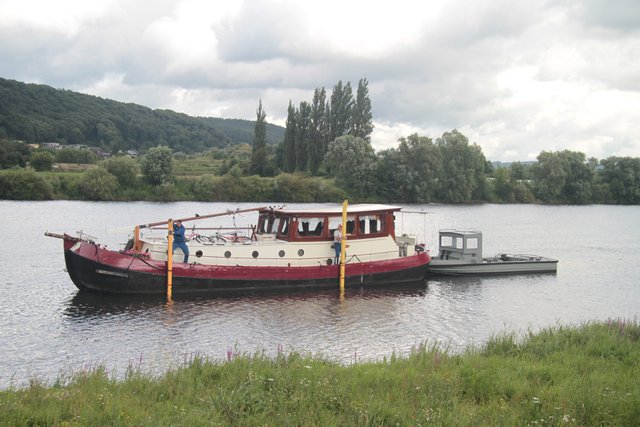 Shipyard pusher positions us on the slip

Finally, we reached a  large and very substantial shipyard which was fortuitously close given that the Moselle+Mosel is hundreds of kilometres long and has virtually no repair facilities anywhere. By now it was near midnight Friday and everyone went for rest as the whole thing had been going for 8 hours and the Police were hours past their finish time. Everyone was very, very good and the Police and tug people came back next day. The only cost for the Police was 35 euros and the tug people significantly reduced their charge to the original estimate despite spending many more hours than estimated because they had been unsuccessful. Where we were was comfortable enough, but encircled on land by high security fencing. The Police negotiated with someone in the precinct to leave a small door open for us all weekend. They also told us where to find the nearest Supermarket and ther shops. They were very, very helpful and agreeable.

The Shipyard only opened for business Monday morning. However, they have been fantastic and Anja has already been slipped for inspection and it is indeed fortunate that damage is far, far less than it could have been and most importantly, we still have the rudder. Having a new one made would have cost a fortune.

The Police will not allow us to be moved (which is reasonable plus it is impossible in any case) and this is the best and only place around. But, on a positive note, it is looking like we can be fixed and back in the water by Wednesday. We have been allowed to stay on the boat and people have bent over backwards to make sure that all is okay. Even the owner of the shipyard has been to see us. The facilities here are first class and indeed they are building a 4,000 tonne 135metre ship 5metres away from us- all from scratch.