Aug 05 Posted by Penelope and David Kerr in Barging 2012 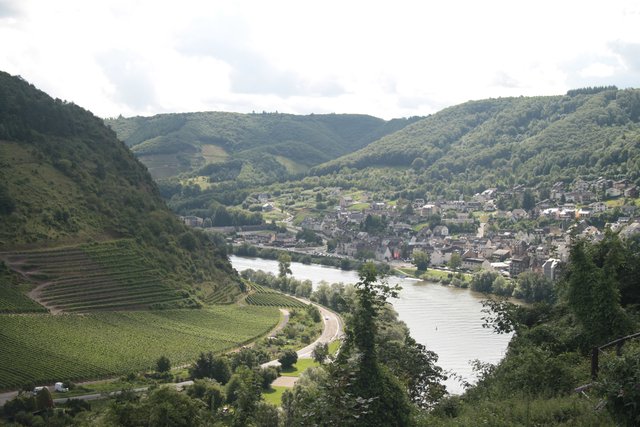 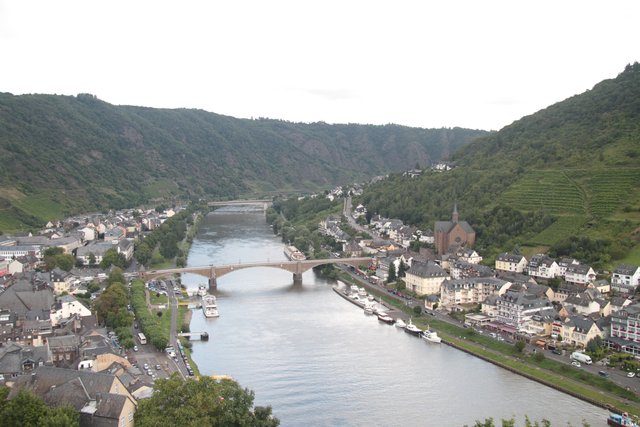 The Mosel (looking North from Castle at Cochem)

During our stay in Germany we have visited both large cities and small towns. The city of Trier was for both of us the first place to step foot on German soil. David's maternal ancestry is German so perhaps it is a wonder that it has taken him so many years to visit.  Trier was in fact an excellent place to start, as it is historically extremely significant and it is also a most attractive city. Set on the banks of the Mosel, it had the title "Roma Secunda" in Roman times- second only to Rome in importance. According to legend the Assyrians had established a colony here in 2000 BC and there was also a pre- Roman Celtic settlement.

Porta Nigra (Roman) at Trier
The highlight of our visit was to enter and walk around the Porta Nigra, one of the original towers of the Roman defensive wall that surrounded the city. This is very well preserved and we climbed up five storeys high within the tower. there was no mortar used to hold the stones together, but still they stand some 2000 years later. The other very interesting preserved Roman buildings include a building that used to be the throne room of Emperor Constantine in the 4th Century and the nearby Imperial baths.

The market place of Trier is a beautiful space, preserving a market cross dating from 958 and was an excellent introduction to us of bright German buildings beautifully kept. Nearby we explored an exquisite little Church attached to the market place, St Gangolf's, which dates from the  14th century. Around the corner is the main Cathedral with a central section dating back to the 3rd  Century when Emperor Constantine's mother Helena donated her home to the Bishop of Trier so that he could establish his Church there. 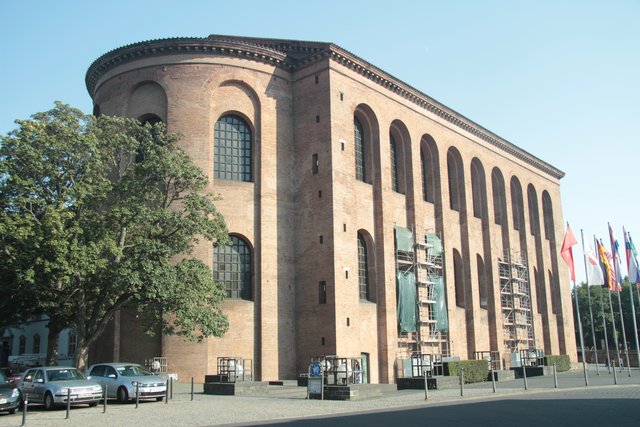 We found Bernkastel and Cochem most attractive buzzing with tourists and full of cafes, guest houses and hotels, wine shops and gift shops. We climbed the rocky outcrop to the castle in Cochem and enjoyed a magnificent view over the Mosel river as well as a guided tour of the castle, built in the 11th century and restored in the mid 1800s. We are amused in these towns that it is easier to buy wine than it is to get bread or milk. The wine is also very cheap. No doubt the usual supply and demand equation is operating. David went today to a wine house to buy something a bit more upmarket than our usual supermarket purchases, but still found that the highest price was 20 euros for six bottles of the best wine on offer there. The excellent French wine from the cellars of Laurent and Delphine, and the champagne we bought on the way through that area, will continue to be the pick of our collection. Sometimes though we feel more comfortable enjoying these cheaper wines with weeknight dinner. 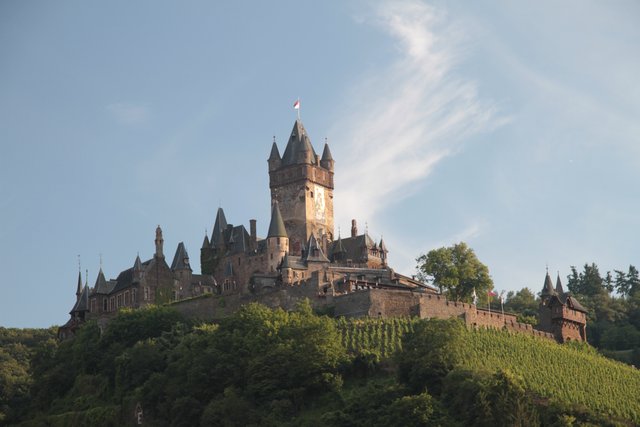 The Mosel continues to join the Rhine in Koblenz. Our documentation suggests that it is difficult in Koblenz for barges like Anja to find places to moor overnight so we decided to stop in Cochem, 50 kilometres away, where there is good mooring. We caught the train which follows the river all the way to Koblenz so that we could visit the end of the river and see the spot where the two rivers meet, called "German Corner" and marked by a huge monument to Kaiser William 1. It was satisfying to be there at the junction and we were very pleased that we had not travelled there by barge, as the currents become stronger on the Mosel as the river narrows, fine for the trip there, not so good on the trip back up the river. The Rhine was flowing even more strongly and a small boat travelling against the current was making very little progress. 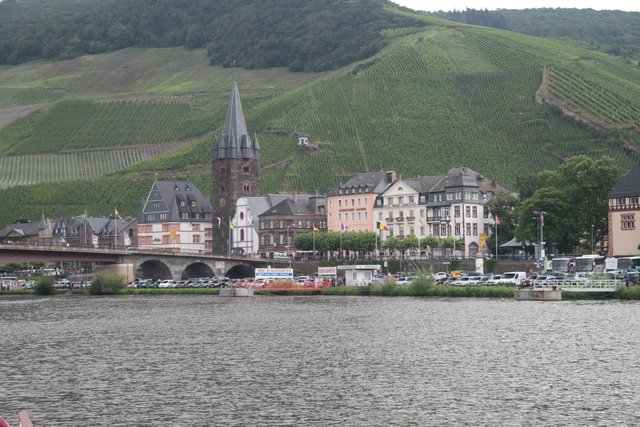 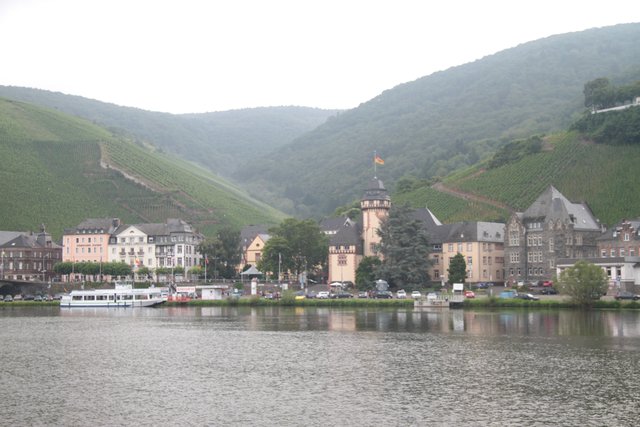 We did not really warm to Koblenz. As well as being a bigger city (population 100,000) much of it was destroyed in World War 11 so perhaps it lacked the character of the smaller less damaged places. I am not sure that the tourist literature made the most of its offerings either. The official English guide from the Tourist bureau (not even a freebie) listed the attractions marked on the map without much detail: just "Church" "Monument" "Building" "Obelisk" and most of the signs were only in German. The most interesting discovery was a sign, not marked on the map,fortunately in good English as well as German, which charted and described the discovery last year of the original Roman Castellum which was at the junction of the rivers. It is now the site of the Basilica of St Kastor, dating from 836, and Celtic and Neolithic remains have also been found there. The Churches are beautiful and on a practical level we have noted that the seats of the pews are equipped with a thin (or in Trier, thick) piece of matting presumably to make the bare wood more comfortable in winter. As in France, most of these churches are still current places of worship. 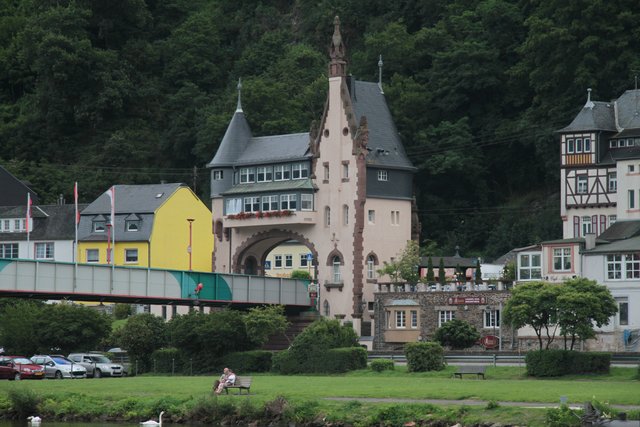 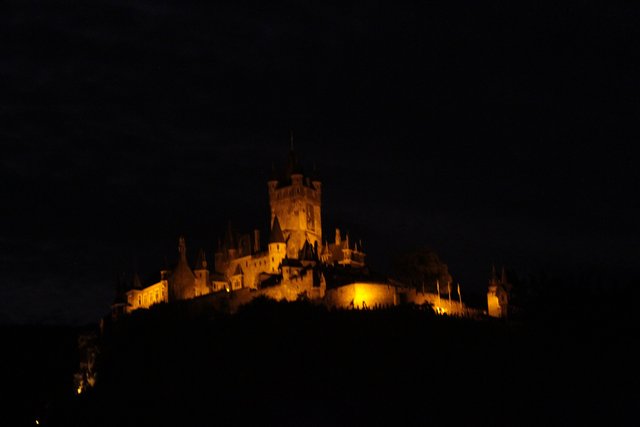 We returned by train to Anja again enjoying the views of the Mosel and the features of the towns as we passed. The return trip of 80 minutes on the train would have taken about 12 hours in Anja. It feels quite good to travel fast once in a while. 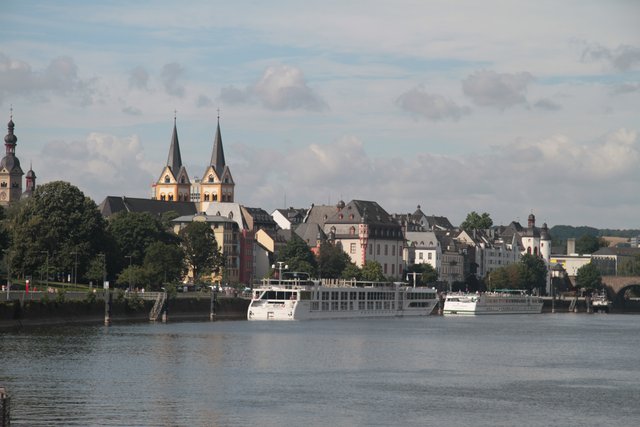 Koblenz (at junction of the Mosel and Rhein) 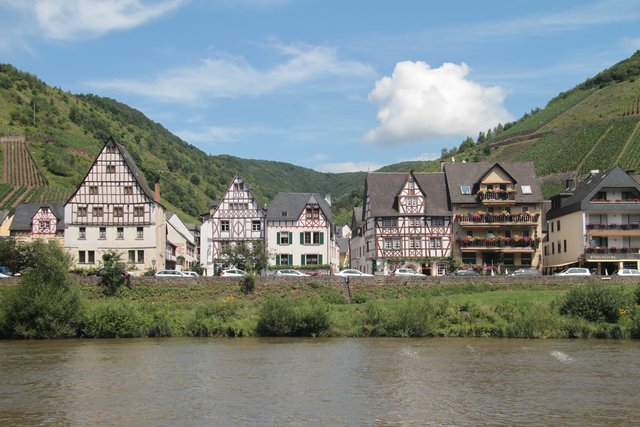 One of many beautiful wine villages 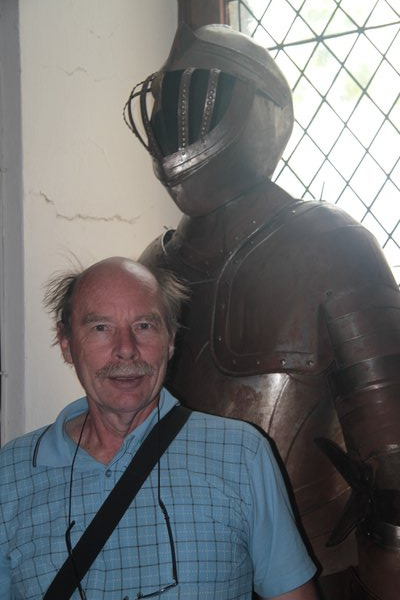 David with a (very much) bigger friend 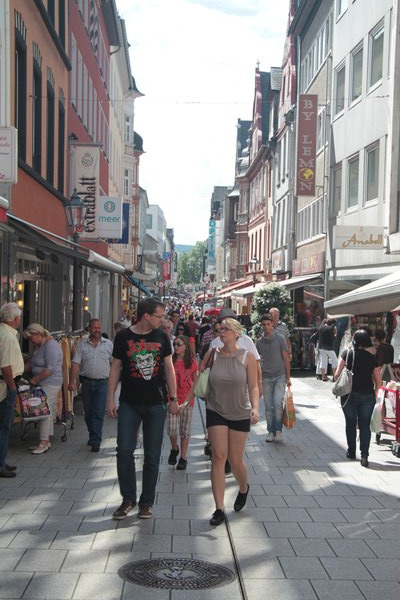 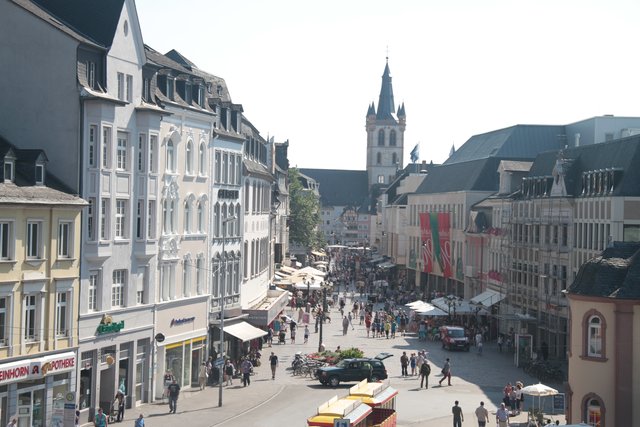 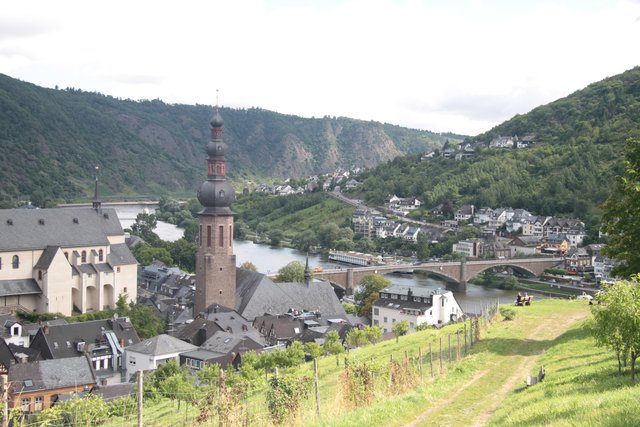 Cochem- from its castle 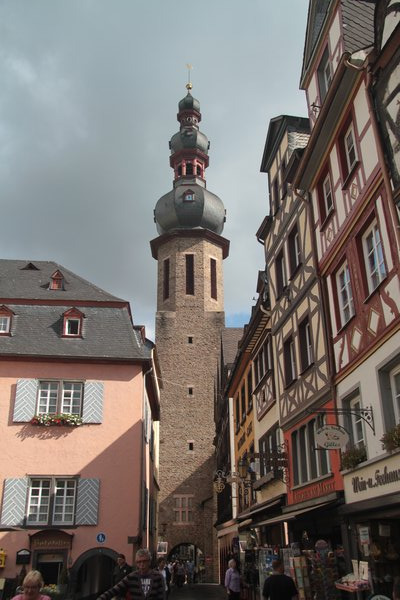 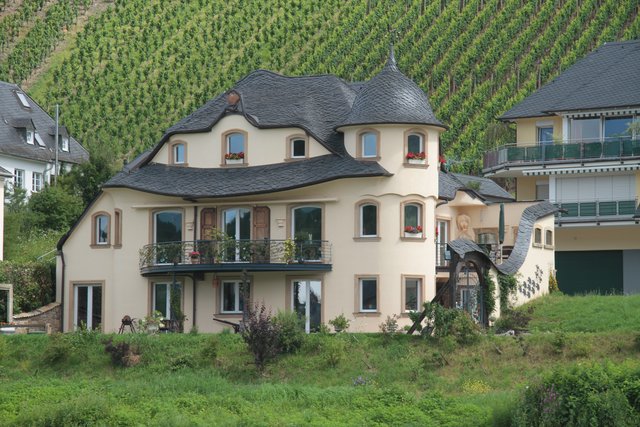 An elegant house along the Mosel 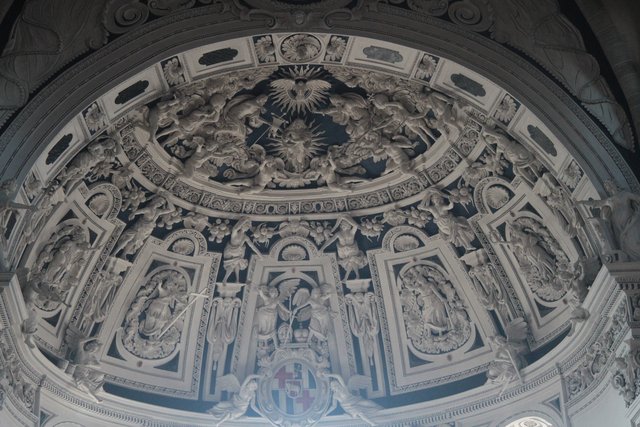 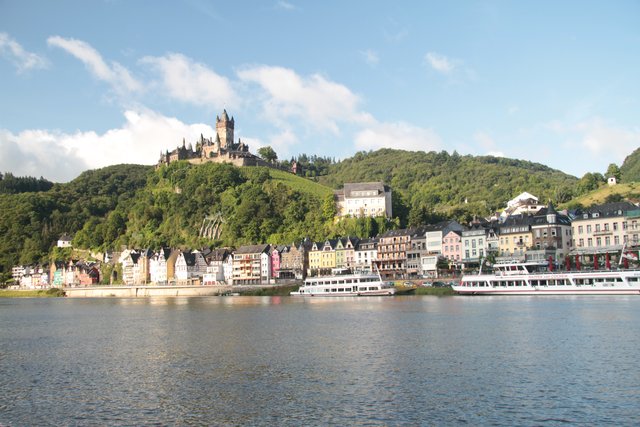 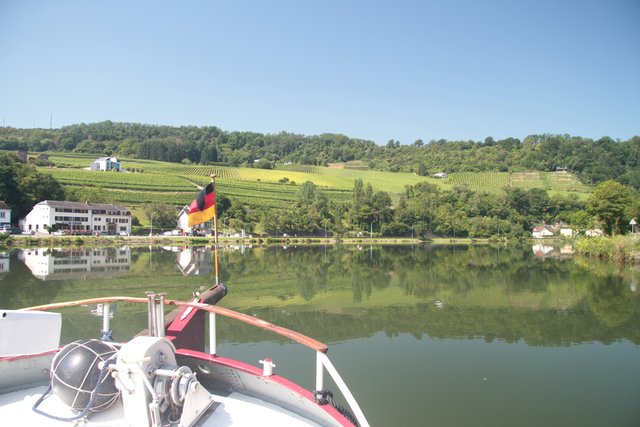 Cruising along the Mosel River 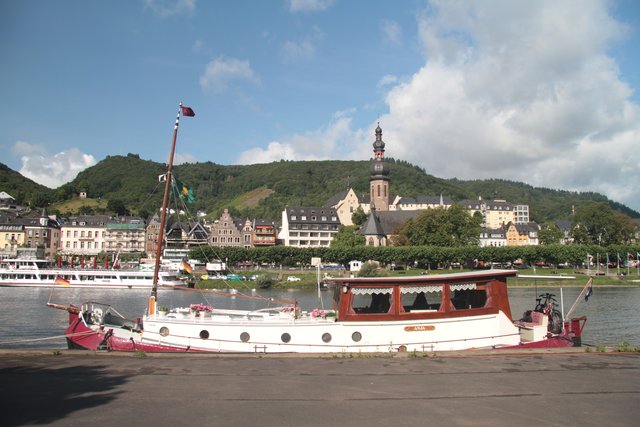 Anja at Cochem with mast up