Jul 28 Posted by Penelope and David Kerr in Barging 2012

The Moselle River rises in the Vosges mountains in France and flows in a generally North Eastern direction into Germany to reach the Rhine River at Koblenz. The next part of our trip is planned to take us as far as Cochem, a town about 50 kilometres from the junction. We will then retrace our steps as far as the Sarre River which will take us back into France.

The river winds past areas of farmland and later leads into the vineyards in Northern France, Germany and Luxembourg. At first the surroundings are flat but in places the land climbs rapidly to high peaks which are often topped with a chateau. There is some industry along here and several power stations, one of them nuclear but mostly coal fired. There is a great deal of heavy barge traffic, transporting the raw materials. The barge loads seem to include coal, gravel, gas, and crushed metal.

It has been very relaxing to go with the current along the river with the locks widely spaced and quite large. Sometimes we have shared them with enormous barges like Big Ben. Their drivers are unfailingly courteous and thoughtful. Though the books warn about the large wash that such barges produce, our experience has been that small speed boats and jet skis have more impact on us when we are tied up. They create more waves and show less understanding of the effect of their speed. Still, it is a very large river and possible for everyone to enjoy it. 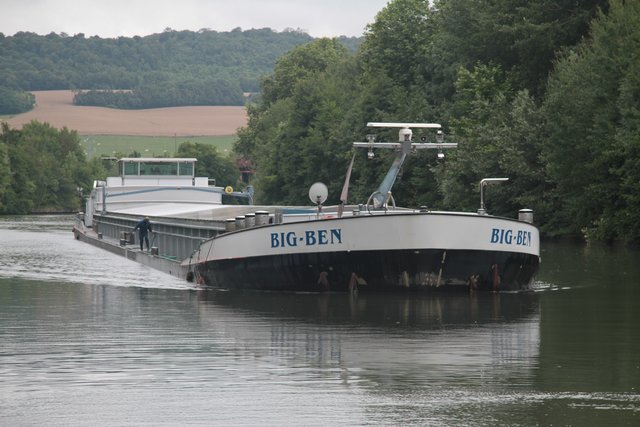 The first major town we visited was Pont a Mousson which had been a University town as far back as the 16th century. The town square was huge and had been set up for the regular Saturday night concerts held throughout the summer. It was surrounded by covered arcades. 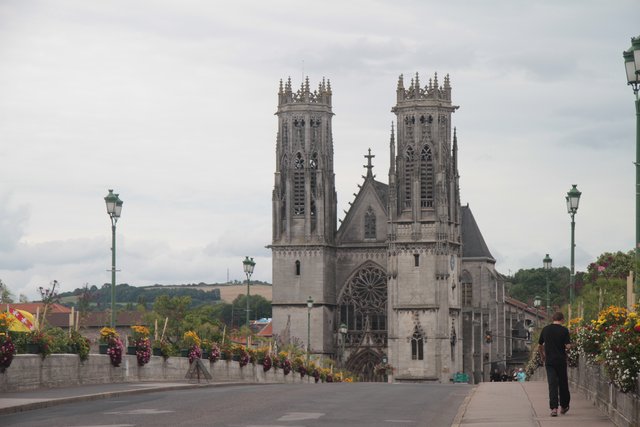 The most memorable visit along the French Moselle was the city of Metz. Here we stayed in a Port de Plaisance on a lake very close to the middle of the city, surrounded by beautiful gardens and several arms of the river. A “Beach” had been set up for the summer with bathing huts and umbrellas, imported sand and plenty of activities. The real summer was just about to arrive after an early cool and wet period and families and young people were out in force enjoying themselves. 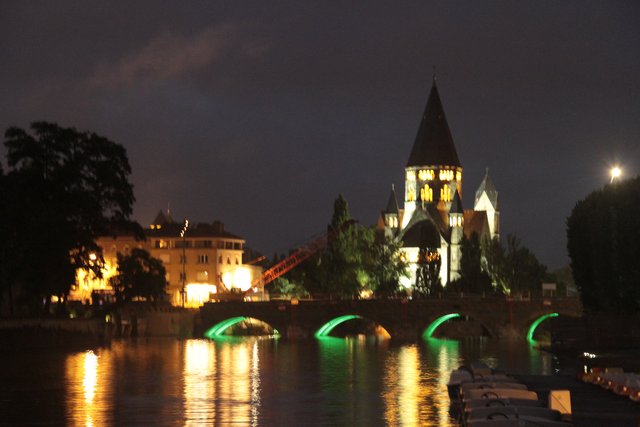 The lower section of Metz by night

We were about to go to bed on the first night when we heard the sound of music close by. We followed the sound and were able to experience the Metz summer sound and light show “The Dancing Fountains”. Hundreds of individual jets of water were synchronised with the music to form a beautiful spectacle not unlike fireworks- they were given different colours, their height and angle varied, and at times they were used as a background to project laser images telling stories which featured Graoully, the Dragon of Metz.

We took the “Little Train” tour of the city to see the major sights and get a feel for the history and stories. Later we visited the excellent museum, to fill in the details. Metz boasts 3,000 years of history, dating back to the Celtic tribe the Mediomatriques which gave the city its name. It became one of the biggest cities of Roman Gaul and we enjoyed walking through the well- preserved Roman baths which had been unearthed when the museum was being enlarged.

The Cathedral in Metz is noted for its soaring vaults and huge areas of beautiful stained glass.  They claim the biggest area of stained glass in any Church in Europe. The oldest Church building in Metz started as a Roman thermal bath in the 4th century. It later became an Abbey. 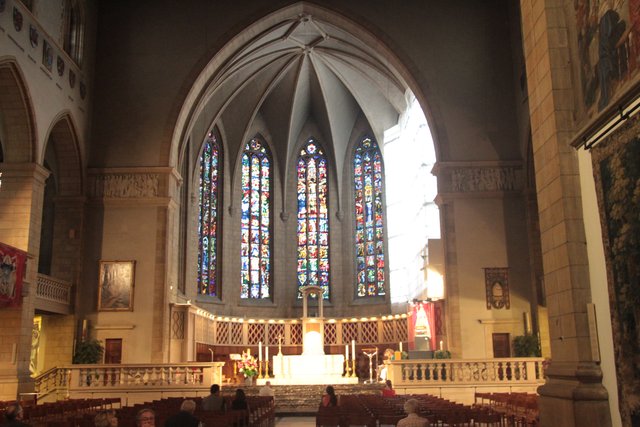 Metz was German territory from 1870 until 1918, then again from 1940 until the end of 1944. Whereas most of France had been liberated by September 1944, the Germans held Metz until mid- December of that year because of the excellent defensive position of the town and its ancient fortifications, including those built by Vauban in the 17th Century. Last year we visited Verdun which had held out the German assault throughout World War 1, because of Vaubon's fortifications there. Also ironically, the “Joan of Arc” fortress held out for two weeks longer than anywhere else.  The German influence is still very evident in important buildings such as the Railway Station, 300 metres long and planned to be able to de- train some 50,000 troops and their equipment including horses, in one day.

Metz is in Lorraine, the home of the small “Mirabelle” plum which is used for the jam that David likes best. We went to dinner there and chose and enjoyed the “Mirabelle Menu” which featured the Mirabelle as an ingredient in each of the three courses. This sounds a bit much but in fact the ingredient was well assimilated into every dish.

After Metz we had one more night before we left France. We stopped in Thionville. Summer was definitely in the air and the local people were enjoying the afternoon on the river, many taking advantage of a fair along the river banks, many others zooming up and down on jet skis. At times we thought we were back at sea on Pastime!

Next stop Germany or Luxembourg, so we would be without internet or phone access, except at expensive roaming rates. We had a German phrase book but no proper dictionary and no really detailed maps so next morning we were able visit the Tourist Bureau and take advantage of their free Wi Fi to upload some of these essentials. We had tried in Metz but the promised Wi Fi in the marina had been a disappointment. We also picked up a handy bike route map. The concept of bike touring here is well- developed and the detail on these maps makes them very useful for boat people, as well as giving details of places of interest and cycle paths when we arrive somewhere. We were very grateful that we would not have to worry about changing currency as we moved across the borders. Thanks, EU.