Sep 08 Posted by David and Penelope in Barging 2014

Sillery, a small village just South of Reims provided a comfortable, friendly and helpful stop for over a week while David had some medical attention and waited unavailingly for a parcel to get through customs. We finally left with the package still in the Customs system but fully appreciated the assistance of the Post Office staff in sorting out the issues. This is a Grand Cru Champagne town so one of the top ranked towns. 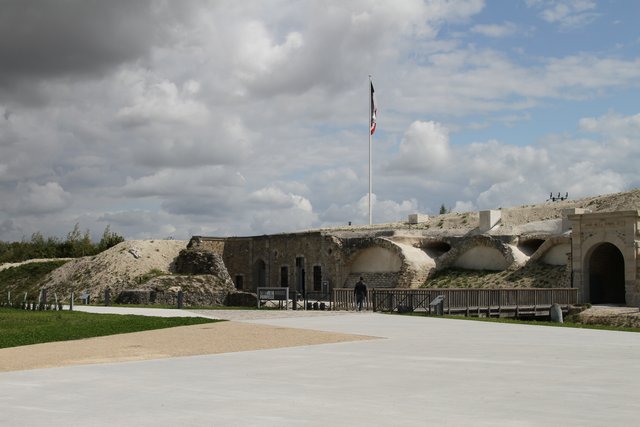 Fort de la Pompelle. The new bridge replaced an old one over the moat.
While in Sillery we went to Reims and re-visited its magnificent Cathedral, particularly to see a photo exhibition documenting its destruction during World War 1. Because of its status in French history as the place of coronation of Kings, it was specifically targetted by the Germans for massive bombing raids and was effectively in ruins at the end of the war. 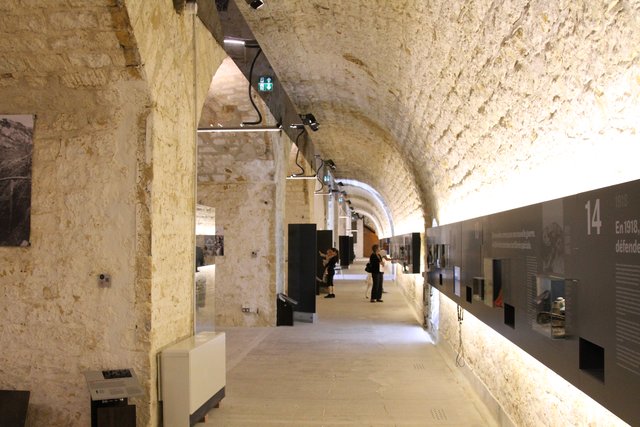 Bunkers within the Fort 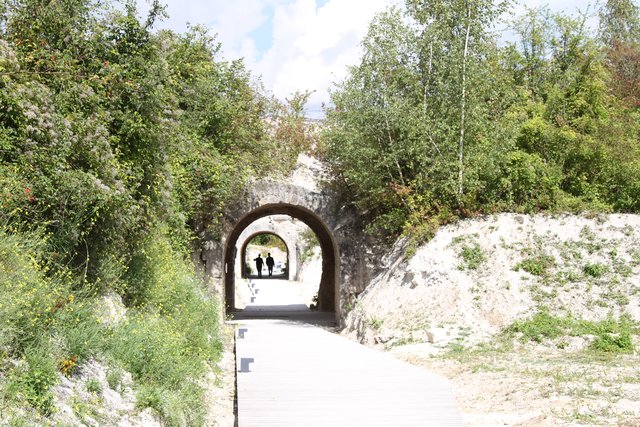 Sillery is the site of one of several huge National war cemeteries with 12,000 graves of French soldiers killed in local fighting. Within easy cycling distance of Sillery is the Fort de la Pompelle which was captured by the Germans on September 4th 1914 and recaptured on September 24th then held by the French for the duration of the war, the only fort held in this hard- fought battle front. To mark the 100th anniversary a new museum was opened there in June this year. In the process of restoration the bodies three French soldiers were found, killed almost exactly one hundred years before. This was an excellent museum with displays in three languages. 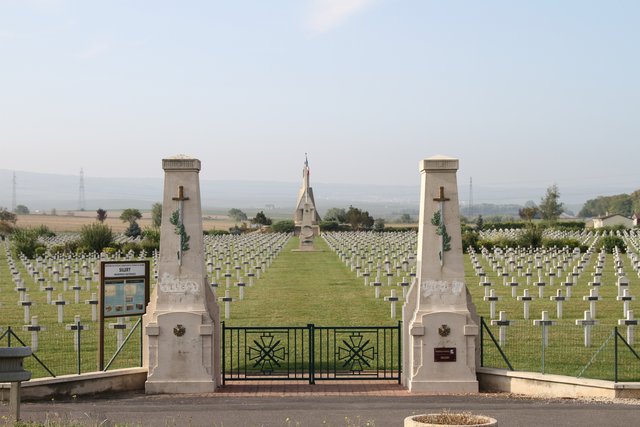 The French war cemetery at Sillery
An unusual event in Sillery was the arrival of a Danish Family, parents and two children, 5 and 7, who are travelling from Copenhagen to Istanbul by outrigger kayak. The kayaks can be pedalled, paddled or sailed, but it seems that peddling is the most used method, especially on French Canals. They are 4 months into the trip which is expected to take 15 months. 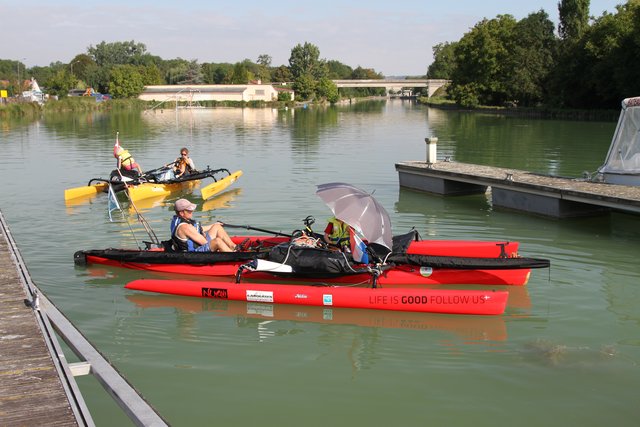 Intrepid Danish Family- Copenhagen to Istambul by kayak
Again the Marne River has taken us by surprise with its beauty. The vine- covered slopes and tree- lined banks are dotted with tiny villages with fortified churches and stone farm buildings. It's early autumn and we have had foggy mornings which add to the atmosphere, and deciduous trees starting to colour yellow and red. As we are going down river we have the advantage of the current. the locks have been automated and work well, so we are fully enjoying excellent cruising conditions. 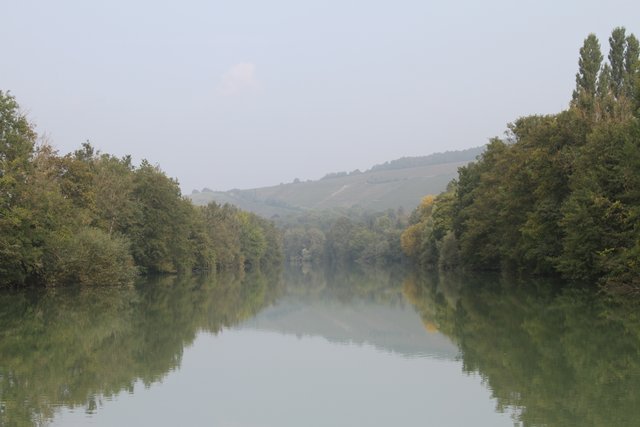 The comfortable and beautiful Marne River 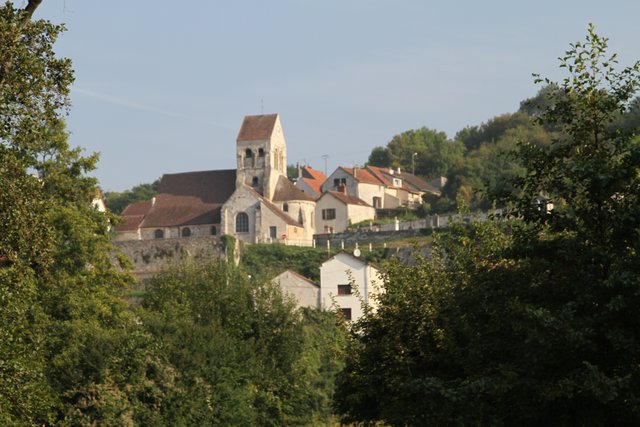 Village with its old fortified church on the Marne 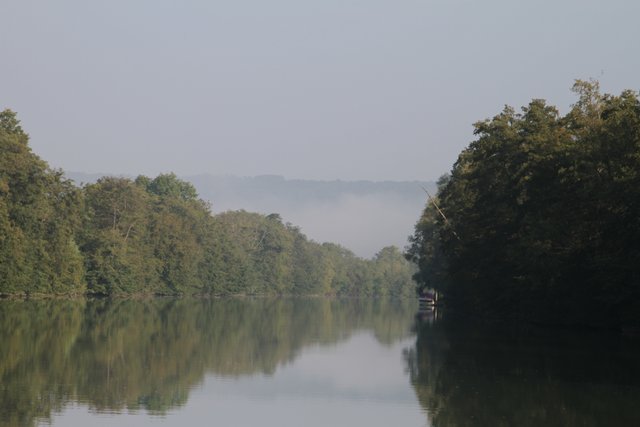 Fog lifting on the Marne 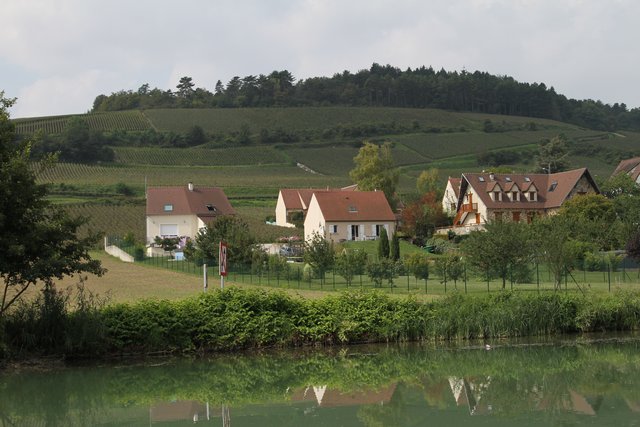